Traditional American "Wedding cake" luxury steamers built in modern times to modern standards have successfully carried overnight passengers on the Mississippi / Ohio River Systems since the 1970s. Now the Scandinavian and Dutch consortium Viking Cruises intend to run European style cruises on the American rivers systems. We presume that despite foreign ownership, Viking will form some sort of American corporation and build their boats in America and staff at tleast the navigation personnel with Americans.  This is clearly a Jones Act protected trade. Or, maybe Senator John McCain will finally get his way and the Jones Act will be rescinded and we'll let anyone pilot in American waters with vessels built anywhere. That will be an immediate 126,000 American jobs lost just when the count starts, but who's counting?  If Viking complies with American cabotage law, and doesn't start lobbying for its abolition this could actually be a bit of a boon for U.S. second tier shipyards and U.S. inland merchant mariners.

Viking operates around the world specializing in river cruises with purpose built river vessels the basic design being long common in Europe , but Viking now operates also in Egypt, China, Southeast Asia, and even Russia. The company has announced that it will home port vessels in New Orleans in 2017. The announcement indicated that the service would open with new boats, so we presume construction in American yards has already begun or waivers extended by Congressional back channels (which would anger us no end) have been conceded. 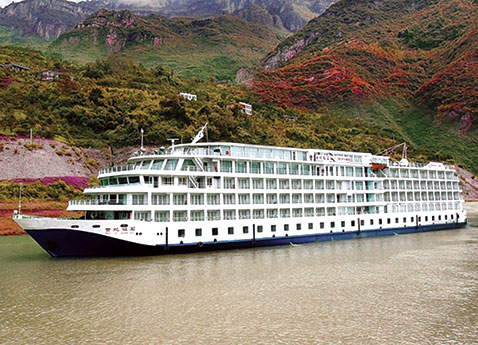 The company states that the new boats will operate on the Mississippi out of New Orleans to points north such as Memphis, St. Louis, or even farther north in summer perhaps to St. Paul Minnesota.
There is nothing that makes the old merchant men here at the AAB happier than seeing brand new big American passenger vessels coming on line. We don't believe the traditional "wedding cake" paddle wheelers have saturated the market yet. Clearly there are some potential river cruisers who aren't looking for a faux 19th century experience. But we are leery of foreign owned shipping operating in U.S. cabotage waters. If Viking forms an American corporation , builds in America, and mans their vessels with American citizens more power to them, they will get friendly and enthusiastic journalistic coverage from us. But if they start to lobby for the abolition or modification of our Jones Act we will be the first to let our readers know and to lobby for their exclusion from the trade. So good luck and smooth sailing Viking we'll be watching with great interest.

But more than a 1½ years later, Viking — a major provider of high-end river cruises on other continents — has faced unexpected regulatory hurdles that have caused significant delays.
Facing a looming deadline, Louisiana Economic Development leaders are working to sign an extension with the luxury cruise company that would put in place a new time frame for Viking to launch local operations and still benefit from a $4.5 million incentive package offered to lure it to the state." READ THE FULL ARTICLE @ THE ADVOCATE        (  http://www.theadvocate.com/baton_rouge/news/business/article_1bb98ca8-7aa7-11e6-a649-4faa395695df.html  )

Editor's Note: A major issue for Viking to over come is the Jones Act restrictions on such domestic trades. Vessels that operate between US ports must be built in America and crewed by American citizens. Viking won't be able to shift any of its existing 59 vessels into this market. If the market expands or contracts Viking can only respond with American built and manned vessels. There are already a number of American cruise lines operating on the rivers employing Americans at American wage levels and bringing visitors from all over America and the world to American river destinations. These trips are affordable and the trade is expanding increasing American employment and improving the economy of a number of river port cities. We see no reason for Viking to receive any Jones Act exemptions. If required to operate under the same rules as the American operators they are a welcome addition. Otherwise they just cost American jobs.

As we write this President Trump just signed an executive order waiving the Jones Act requirements for relief cargoes to Puerto Rico. We accept this as necessary while resisting the demands by Hawaii and Puerto Rico the repeal the Jones act either totally or in part in so far as these US islands are concerned. The Jones Act insures the existence of the American Merchant Marine. Years ago we repealed the operational and construction differential subsidies that kept the American Merchant Marine alive in the face of foreign competition with crews that would work for a daily rice bowl after WWII. Our international fleet has suffered ever since. We don't suggest a general return to subsidies but we think Hawaii and Puerto Rico , the US Virgin Islands, Guam, and perhaps Alaska pay a dear price for this element of US security. We suggest that the Federal government should consider subsidized liner services under the American flag for our over seas states and territories. This would be a very limited and targeted use of subsidies and simply represents a sharing by all of us who benefit on the mainland economically as well as security wise in the extraordinary costs imposed on our outlying areas at a time when our ocean fleet has been allowed to shrink to a point where it can't support those areas adequately. If we consider emergency naval logistics, our own economy, national security, and fairness to our out lying communities; subsidy of adequate US flagged liner services is the only answer.