THE GREAT NAMAZU ON NAVY COFFEE

GREETINGS ALL CAFFEINE SUCKING BIPEDS BUT ESPECIALLY YOU COMMISSARY MEN OR WHATEVER THE NEW SYSTEM CALLS YOU NOW AND MESS COOKS.

I've been living at or under the sea for 3,000 years and now I'm writing for an organization totally dominated by former boatswain's mates. Johnas and the rest of the motley crew at American Admiralty Books suffer from a malady of the index finger common to US Navy and Cost Guard Boatswain's mates or whatever they now call 'em in the new politically correct  Navy. The malady is called "coffee cup finger". The righteous, proper, and traditional boatswain's mate is basically propelled by coffee which is nearly always in hand.  Unfortunately coffee is most often produced in large crew messes by temporarily assigned non rated men who unfortunately are often not "cook strikers" and take no real professional interest in what should be one of the most important support functions on ship, MASTER OF THE COFFEE POT, which in many cases is more like the coffee barrel, urns that can hold literally a gallon or more of the absolutely necessary black liquid that fuels the fleets crews. Crews have dealt with the warm brown dishwater like contents of the large mess coffee urn for generations. They either kill their taste buds or "flavor" the caffeine carrier fluid with cow juice. I believe its time to stop the adulteration processing of this most important maritime fluid! 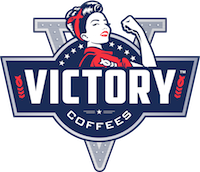 Victory Coffee is owned and operated by former Navy SEAL Cade Courtley and employs US naval and military veterans. Really shouldn't all you sailors and vets be supplying your home coffee mess with Victory coffee, not just because it supports vets but because its really good, a company of folks who understand the cosmic importance of a cup of Joe. How about all of you detached element members, and small unit or shore side office crews who have to pay for your own in work spaces coffee mess? ( The first time Johnas, after retirement, saw a self funded coffee mess, and realized that the Navy and Coast Guard no longer took institutional responsibility for support of the fleet coffee habit for those members at a distance from an official galley, he was certain the communists had taken over. Terrible as his reaction was, I do have to admit that it pales by the state of catatonia that the elimination of traditional rate titles had on him, he has been in a coma like state now for several weeks. We are hoping that the aroma of a hot cup of Leatherneck  (VICTORY's darkest roast) may bring him around.)

OK, lets do something to really once and for all end bad coffee fleet wide.

(1) First all you mess cooks buck up, accept responsibility with pride for your turn having custody of the coffee pot or urn.

(3) If you run a small work space coffee mess go to VICTORY COFFEE  http://www.victorycoffees.com/our-story and order the good stuff.

(a) Do a tutorial on making mass quantities of  Coffee properly.
(b) Experiment with blending small quantities of great coffee like the various Victory Blends and provide instructions to mess cooks ( would also work for restaurant personnel) on improving big institutional pots of coffee with small amounts of premium coffee that may or may not have to be obtained by "cum shaw" methods.
( c) Make a Victory Blend for quantity brewing such as on a carrier mess deck and try to get it into the Navy / Coast Guard/ Marine Corps purchase systems. ( Hint may be saleable to small Coast Guard units directly).

Let's all active and veteran sailors get behind the movement to get the warm dishwater off the mess deck and put quality coffee out in even the biggest messes that can  hardly be screwed up by even the most disinterested mess cook. Come on Commissary men or whatever you're called by these days. Push to get a little aboard. Then lets push Cade to get his ass back on Shark Tank and get some capital to get the good stuff onto our mess decks and into the commissary. My pal Johnas has had a lot of shocks to his basically naval sensibilities of late. The smell of gallons of Victory Coffee brewing might bring him out of his coma.

Lets get cranking! I'm a three thousand year old giant catfish, retired demigod, I know stuff! Pick up on this and run with it you maritime bipeds! GOOD COFFEE IS OF COSMIC CONSEQUENCE! At least demand that this stuff get on the commissary shelves immediately.

Tell him you at least want to see this stuff in the commissary right away.