SOMETIMES A GREAT NOTION...THE AIR FOIL AND THE ASCENT OF MAN 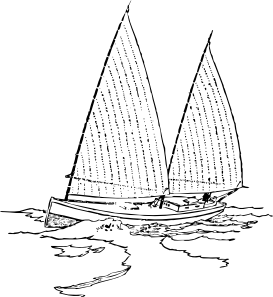 It is a bit unusual for a ship's master, but I once  taught  in a high school. I taught nautical arts and sciences so it wasn't that much of a stretch, and the high school system owned a 65 foot training vessel that I also served as Captain on. So even if my presence in the high school didn't seem that mysterious to me, the maritime world was a near complete mystery for my "merchant marine cadets" in the first weeks of class. The early weeks of class were a lot like the early weeks at the Harry Lundburg School of Seamanship, which is to say these weeks were a lot like a sort of civilian version of boot camp at Great Lakes Naval Training Center but done on the installment plan.  My goal was to instill paramilitary discipline while inspiring and motivating the all volunteer vocational / technical career path students to really want to become mariners.  So after the basic introduction I began with a question.

I asked the class, called "the ship's company", "what single invention has had the most significant impact on man kind?"  I received some of the usual answers like the wheel, fire (hardly an "invention"), the printing press, while a few figured that the answer, given the nature of the course had to be maritime in character so I also was offered the steam ship, the steam engine, and the screw propeller. "No", I answered," none of those" then I went to the chalk board and drew two triangular shapes . "What's this" I asked? "A pair of triangles?"," A sail!', "A wing!'. No I'd say "think generic there is one name for both shapes, indeed you are simply looking at the same shape displayed vertically and horizontally, what is it?" Silence. "It's an airfoil", I'd say.  "Deployed vertically this shape is used as a sail and horizontally as a wing. "
More so than any other single invention this simple shape changed and shaped the world. In its' earliest manifestation, the square sail, it gave rowers in the ancient galleys a break when the wind was astern. But once the wing like lanteen sail was invented by the Arabs, rowers were no longer needed. Hard to carry food calories could now be used to support a smaller crew and not to provide direct propulsive power for the ship through a virtual army of rowers. The range of ships and their cargo capacity increased continually and dramatically. Long before the zenith of the age of sail Columbus was crossing the ocean sea on basically a mix of square and lanteen sails.  As navigational arts developed in the wake of the physical capacity to sail out of sight of land, long ocean voyages could be repeated at will and  trade began to expand into a global enterprise.

As global commerce began to take shape and Europe began to plant colonies the demand for higher speed, more efficient sailing, and more cargo capacity began to drive the technological development of sail. The zenith of the age of sail would culminate in the development of the famous "clipper ships" with their global reach and complex rigs.

Commercial sailing technology would reach its zenith in the late nineteenth century  about the same time that steam engines would mature driving railroads and river boats to a point where commercial ship operators were prepared to use them at sea. Man had taken the air foil in vertical deployment about as far as it would go for commercial transport , and the air foil or sail had taken man around the world and back again many times over.
As mariners, ship wrights, naval architects and sail makers studied the function of sail , or the air foil in vertical deployment, it was very early on realized that the sail functions by channeling wind  towards the "Luff" which is a fairly narrow area near the mast. High pressure forms on the windward side of the sail and low pressure on the leeward or opposite side. Air moves from areas of high pressure to areas of low pressure. But the sail prevents the high pressure from infilling the low pressure area and a force known as "drive" is created. The mast is set in the hull which is set afloat in the low resistance medium of water. The "drive" exerted near the mast propels the boat forward. Notice that even the square sails on the clipper ship above can be rotated around the mast almost 180 degrees producing  at least some drive on all points of sail. In between the square sails are numerous triangular sails which are more efficient sailing closer to the wind. The sail plan was based on a law of averages but consistently produced excellent speeds on all points of sale.
Now every sailor who ever had to furl sail knew that an air foil if it got into a horizontal plane could exert a force  known as "Lift".  A wing is simply an airfoil deployed in the horizontal mode. Both lift and drive were very well understood by 1903. In 1903 the steamship was  dominant in maritime  commerce but there were still plenty of square riggers working when the Wright Brothers turned their airfoils into the horizontal position , attached power for a constant source of air flow for the creation of "lift". The Wright Brothers soon learned that control after lift off was the most difficult. At first they tried "wing warping" or changing the shape of the wing to control direction and altitude which was pretty much what sailors did with sails by use of the running rigging such as sheet lines.  Soon they opted to change only a portion of the wing's basic shape through the use of ailerons, stabilizers,  and the ship's rudder's cousin, the tail rudder. The world began to shrink at a much faster pace. Only 66 years after man's first heavier than air flight we landed on the moon. Truly sometimes a great notion is as simple as a mere shape and may come from someone as simple as an ancient sailor.

I would tell my students after leading them through this exercise that mariners are part of an ancient and learned profession. Our profession's discoveries gave the world, the world; sewed it together and then gave it flight. Then I'd give them this little known fact. When the Wright Brothers made their first  flight at Kitty Hawk the hands that gave their flyer its initial push off were those of sailors of the nearby U.S. Life Saving Service Station, one of the ancestral organizations  of the U.S. Coast Guard. Once the ''Wright Flyers" became controllable in flight one of the first purchasers was the United States Navy. If you visit Dalghren Hall on the grounds of the Naval Academy you can see the Navy's original Wright Flyer: suspended from the ceiling.