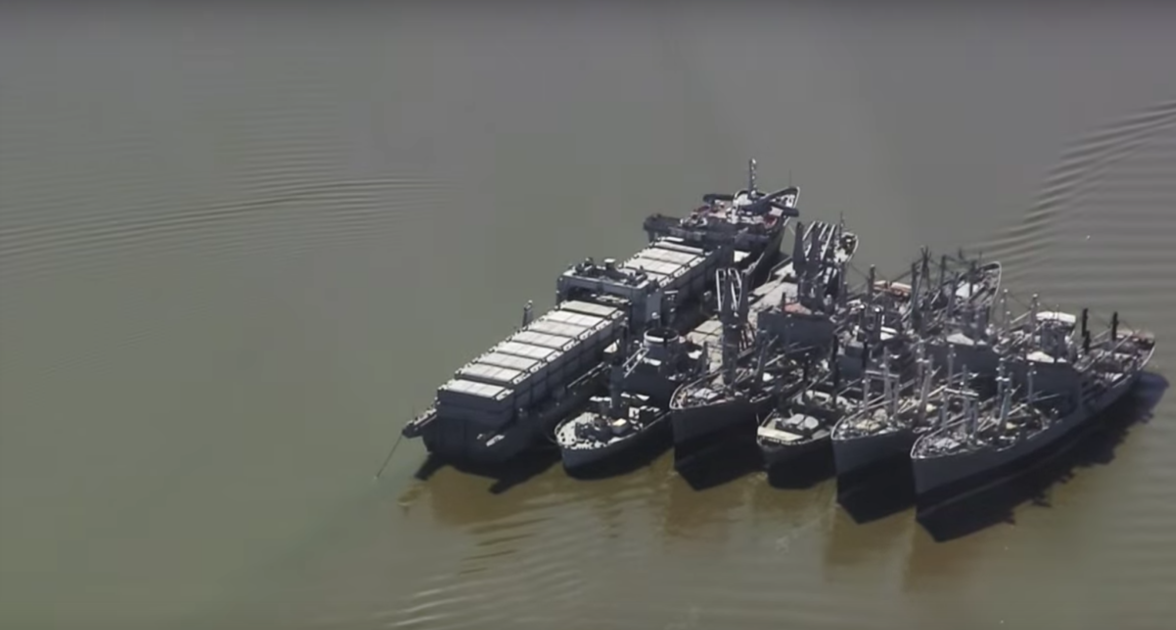 National Defense Reserve Fleet Suisun Bay, Calif. in 2014. US Navy photo and illustration from the USNI report on the same subject
According to reports by the US Naval Institute and others a recent test of the Maritime Administration's "Ready Reserve Force" found it not so ready mechanically and physically, as well as too small in terms of numbers of ships, and woefully short of manpower. .The recent results of a sail on short notice exercise  revealed that only about 40% of the already too small fleet was actually able to sail. The exercise was called "Turbo Activation " , and occurred in September of 2019. Some sources indicate that the exercise involved 28 ships from the Military Sealift Command and the Maritime Administration's (MARAD) reserve fleets on the Pacific, Atlantic and Gulf Coasts. "Turbo Activation "  was the first exercise of this magnitude since 2003. This latest test of activation of our available to the navy auxiliary and supply chain fleet revealed continuing short falls in our readiness to carry out sea lift requirements in even a small regional conflict. In our opinion this means our sea lift capacity is woefully inadequate for a near peer contest. 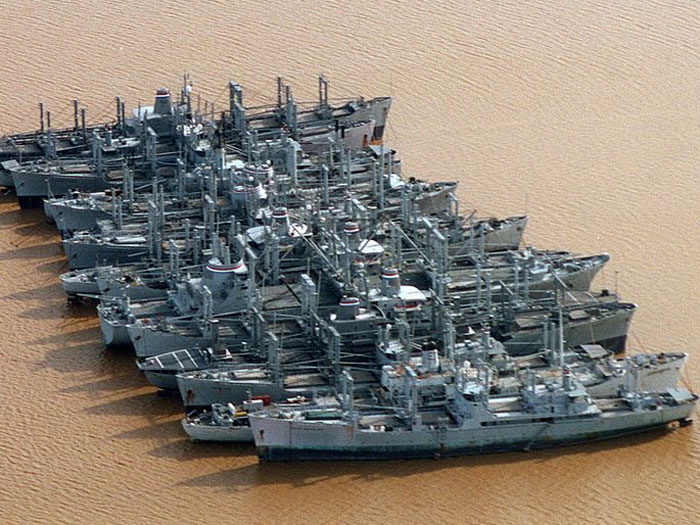 MARAD PHOTO: NATIONAL DEFENSE RESERVE VESSELS  Prior to "Operation Turbo" the Maritime Administration was not harboring any great illusions about the readiness of the reserve fleet. MARAD never claimed an estimate of reserve ship readiness over 60 percent. The results of Operation Turbo indicate that real readiness is down to about 40 percent. A large percentage of the decrease in readiness is related to the sheer age of the reserve ships. Typical ships in the MARAD reserve are 30 years old. That's a long time just for the service life of the hulls; when we get into the electro / mechanical systems we are talking obsolescence . The crews have aged too. Many of these reserve ships have steam systems which have not been utilized in ships since just a few years after the existing reserves ships were new builds. Marine engineering officers ate rarely tested on steam systems today. After 30 years most of the maritime labor force that knew how to operate steam machinery died or retired. There is no existing merchant marine training pipeline for steam engineers. Even if we could find the engine room crews, there are few if any spare parts for these ships. Unfortunately in times when honorable discharges are as scarce as hens teeth among the members of the House and Senate increasing any military or naval budget get short treatment. The Navy has a difficult time squeezing enough funding to build about half of the actual combatants that we actually need. "Auxiliaries", "supply vessels" and their like don't have the sex appeal of air craft carriers or nuclear submarines. Most of  our existing  legislators at best, could care less about such matters and a growing number are actually hostile to adequate defense and border control. Many in the Navy are unwilling to compromise on big combatant construction budgets. But the Marine Corps and the Army are both subject to the potential of finding themselves stranded on some distant shore with totally nadequate supply lines. Does the health of our Merchant Marine concern anyone out there? Marines and soldiers if tey think about it. Does Congress care? No. Does the President care, yes, but he does not have the power of the purse and faces unreasonable opposition to defense and border security from DEMOCRATS CONTROLLING THE HOUSE.
SEE ALSO: