Would You Believe Him If He Told You He'd Stay In His Own Territorial Waters?  Didn't He Just Say That Your Waters Are His Waters. 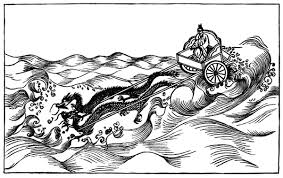 The Middle Kingdom has Provinces. The Provinces are not similar to American States, they are completely under the thumb of the Central one party government. But the Provinces do have provincial governments and the coastal provinces have their own fisheries enforcement apparatus. The swimming dragon, the latest "pet" of the Middle Kingdom, has been taking a little heat of late from the international community for its thug like behavior towards its coastal neighbors. In an obvious attempt to reduce critical scrutiny the dragon has announced a strategic pseudo-retreat.  Chinese Foreign Ministry spokesman Hua Chunying said in an interview Tuesday that new ship boarding , visit and search rules recently announced by Hainan Province will only be enforced within Hainan territorial waters. When pressed Mr. Chunying did mention 12 nautical miles or 22.2km but around what, we aren't sure. Hainan is the Chinese Province closest to the disputed islands of the Spratleys, some of which are claimed and even populated by the Philippines. China recently spent over a billion dollars to set up a town on one of the previously uninhabited rocks and dubbed it the sort of county seat of Hainan's Spratlys. The Chinese of course claim they own all of the Spratlys.

We have a simple but very clear view of how this is all going to end eventually if we don't find a way out. While busy acting in a thug like manner the Middle Kingdom will finally commit an out right act of war against Japan, or the Philippines, or both, that can not be ignored. Response will be made, and China will exact a reprisal. At this point the defense treaties between Japan and the United States and our markers with the Philippines will be called. Despite our lack of interest in the contested real estate and our almost co-dependent trade ties with China the U.S. Navy will enter the fray. Whether we ever declare war or not the U.S. will have no choice but to, at the very least, suspend payments to China on its debt. One simply does not finance the opposing government while engaged in an "armed conflict". China's economy will be ruined over night. The Japanese Maritime Self defense Force is actually larger than the British Navy today and drills and exercises with the U.S. Navy on a regular basis. The new , large, modern Chinese Peoples Liberation Army's Navy will no doubt get in some painful hits but in the end it is headed to the bottom of the sea. Neither the U.S. nor Japan have any desire to invade the mainland or change the government of China. Unfortunately that may not be enough for us to simply declare victory at sea and go home.

Both sides are nuclear armed. The U.S. has never signed off on the no first use of nuclear weapons idea, and while China has sworn off first use their word is useless. We must start giving this thug like behavior of China's real media attention. The American President must speak to the people about this real and present danger. China must see that that they are engaged in dangerous brinkmanship sooner rather than later. We need to continue and speed up a larger naval presence in the Pacific generally and in and around Japan and the Philippines. We should start to discourage U.S. investment in China, issue travel warnings, and start complaining loudly and frequently in the UN. Unless and until China comes to the bargaining table in an international forum as its coastal neighbors are requesting there can be no real hope for peace. China demands bilateral negotiations but her neighbors see it as an unequal contest. China must either accommodate her neighbors or admit to being the neighbor hood bully and face the music that all such thugs eventually face the combined forces of the outraged and bullied.

But then that's just us and our opinion. We're just a bunch of war mongering old salts. Follow the link below to the news story by Philippine reporters and read first hand from the region whats going on. Surely some among you will find some redeeming virtue in the dragon.  As for us we think reptiles aren't worth the powder and shot it takes to blow 'em to hell. We thank you for your kind attention.
http://globalnation.inquirer.net/60823/china-ship-checks-limited-to-coast

Posted by American Admiralty Books at 12:27 AM