UNDER OBAMA WE HAD A DETERIORATING MILITARY 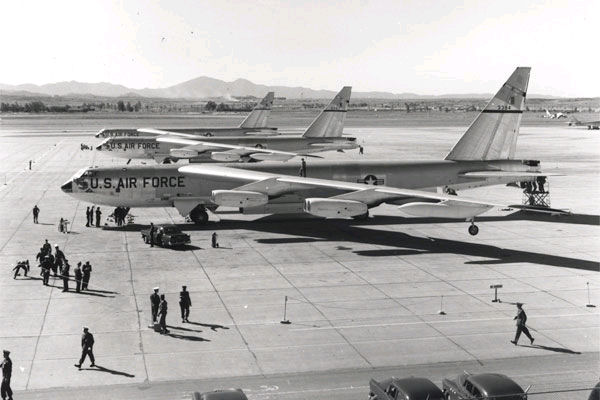 B-52s on the tarmac after their historic 1957 around the world flight. (USAF Photo)

Despite the fact that we clearly have a serious technological edge and the best forward basing of any military in the world, our military showed a steady decline in size , maintenance, and upkeep during the Obama administration. Maintenance and upkeep are part of military readiness. Our own President and Congress set up our Department of Defense forces for suffering multiple "mission kills". If you can ground an aircraft without destroying it at a critical time, that would be an example of a mission kill. If you can render a naval vessel inoperative at a critical moment, far short of sinking it, that is another example of "mission kill". When certain elements of our military have to raid aviation museums for aircraft parts due to budget shortfalls, those wielding the power of the purse inflict on our forces a potential for multiple critical "mission kills.

The word from our maintenance non commissioned officers across multiple service lines is that potential critical mission kills are stacking up, and its not from "enemy action" ( unless you accept as we do, that the President Obama, and the Democratic Party and all of their Congressional members, and all of the asleep at the switch Republicans in public office are "enemies of the United States"). If, like some of our staff, you have occasion to visit and dine at Department of Defense facilities on a regular basis you may hear some of the following themes being discussed by enlisted maintenance professionals. This information isn't classified, probably only because the civilian leadership responsible for these potential mission kills are so egotistical that they think their folly goes unnoticed by what they consider to be "lowly enlisted people"; or the senior civilian leadership is in fact not evil intended, but simply incredibly stupid and un-knowledgeable about military arts and sciences. Here are few examples of the buzz around DOD enlisted maintenance professionals that continues into the first year of the Trump administration which can't possibly undo all the damage in a single year.

1.  The Air Force cannibalizing parts from some F-16s  to keep other F-16s flying and has on occasion pulled parts off of museum planes to keep the B-1 bombers flying. The enlisted view is that about half of all Air Force squadrons were not prepared for full combat operations up to January of 2017.  The cannibalization of parts is not just enlisted open  mess "scuttlebut" but even drew some attention not long ago from FOX news .

2. The Air Force isn't alone. The most "ready" of all U.S. Forces, The Marine Corps has pulled parts off museum planes to keep their F-18s  ready to fly. Even with that drastic and innovative action the Marine's super maintenance professionals are so parts starved they have of late only been able to keep about 30% of their F-18s flying.  Our research indicates that Marine combat pilots should receive about 30 hours a month in cockpit training flight time. Our educated "guesstimate" is that with only 30% of the F-18 inventory flight ready, some pilots were getting as little as 4 hours per month flight training time.  Even with the drastic action of pulling Museum plane parts, only about 30 percent of Marine Corps F-18s were ready to fly in January 2017. Not only that, but instead of getting 25 or 30 hours a month in the cockpit, Marine Corps pilots were getting as little as four hours per month of flying time. Again, the dinning hall scuttlebutt has been confirmed by news media investigative reports.

3. The maintenance issues aren't limited to planes.  The U.S. Navy keeps extending the deployments of its ships. We don't have to depend on "Scuttlebutt" to know that. Anyone can read about it in the pages of the Navy League's magazine, The US Naval Institute's PROCEEDINGS, and even periodicals whose target market is commercial ship yard employees. While all sailors perform maintenance while underway, some things must be done in a yard. The longer you extend deployments the more the yard tasks stack up. When the ships do finally get to yards , even if there is no break down, the extended period on dry dock amounts to an effective "mission kill" if that vessel is critical to a suddenly arising emergency while it is still "on the ways". The Navy's admirals conservatively estimate that they need about 350 combat ships to meet the current defense and security commitments of the United States. We think the admirals are being overly conservative under extreme political pressure. Regardless, they are being forced to make due with a fleet of 273 vessels. Even the Trump administration's naval construction plans fall short of the mark but are a serious improvement over the Obama neglect. While the Chinese navy/ coast guard fleet has only one air craft carrier task force , their coast guard alone numbers about 600 ships that compare in size to our USCG National Defense Cutters (our largest) down to our medium endurance cutters (still ocean going capable warships). Our high to medium endurance cutter fleet numbers only a few dozen vessels. The Chinese navy, while containing a large number of small combatant vessels probably not very capable outside of the South China Sea, still numbers near a 1,000 vessels. The lesson of the WWII German battle ship BISMARK sunk by a small "gang" of British "tin cans" in WWII is that "sometimes quantity has a quality all its own". A bunch of lesser capable ships can gang up on a "death star" like a super carrier and eventually bring it down, if the owner of the cheaper vessels is willing to lose a few in the contest.

4.Serious crashes, some fatal to crews of Marine Corps aircraft were nearly double their ten year average through January 2017.

5. The U.S. Army's tanks, heavy artillery, and rolling stock also require a lot of maintenance. The defense periodicals have reported that only one third of Army brigades were ready to deploy through January 2017. Army manpower has suffered from the budget ax as well. The fact is the U.S. Army is now at the smallest level man power wise that it has seen since before WWII.

6. Not to pick on the Air Force, but some of the data about budget cut effects are most headline worthy relative to the Air Force. Here is a factoid that didn't make much news ink, but illustrates the effects of the nearly 25% budget cuts imposed on the armed forces in recent years. The B52 bombers of the Air Force  now average 53 years of age. That would be ancient for a still serving Navy war ship, and war ships are made of much sterner stuff than air planes.


This is just a glimpse into the real state of our armed forces under the Obama administration and after bearing the brunt of Republican administered "Sequestration". The first and most important role of the Federal government is the defense of the nation. We face hostile and rising would be peer powers in China, and Russia, as well as the constant Islamic terror threat and engagements with such Islamic terror organizations as ISIS. Yet the civilian authorities in Washington of both parties are failing us by any measure in terms of the national defense. Apparently,Obama is a relatively open ally of the Islamic terrorists, and not very interested in competition with socialists states. But even the Republicans in Congress appear clueless allowing the lion's share of budget cutting to fall on our military.

We think this explains a lot. The Republican party nearly split in two over the Trump juggernaut. The elite of the party seems to think a lot like the "moderate" democrats. The rank and file want someone who knows the magic words "you're fired" Cut from foreign aid, cut PBS and Planned Parent Hood's millions, there are a lot of cuts that can be made other than our protection. The  Republicans seem to be aligning now behind the winner of the general election Donald Trump, even if some have to hold their noses . The Democrats now appear on the verge of splitting into two parties. The outright socialists like Bernie, and liberal feminist who will vote for Hillary just because she is female. Even liberal media polls indicated a dead heat between Hillary and Trump, but we think these polls were wrong. To us it is  looked like a Trump landslide. Plain and simply all Democratic party propaganda to the opposite , Hispanics of Cuban origin remember the Bay of Pigs, they are not going to vote Democratic. Most other Hispanics are Catholic and in vehement disagreement with Democratic support of abortion on demand.  But to hear the Democratic pundits and liberal media one would think that it is a given that the Democrats "own" the American Hispanic vote. We served on active duty with many great Americans of Hispanic heritage including newly arrived legal immigrants. They don't march lock step for anyone. We have to wonder if the media and the liberals pundits even know any Hispanics.  Talking with real American women and real American blacks we didn't see either of those votes going as a solid block to either candidate, but find that real people are not nearly as adverse to a Trump presidency as the media and democrats would have the public believe.

Lincoln said : "You can fool all of the people some of the time, and some of the people all of the time, but you can't fool all of the people all of the time. "  The people have woken up!  We predicted  that they would put Trump in. We caution that the people this time, must stay on the alert and insist on the change promised. The people must  watch everybody like a hawk for the next eight years, tossing out of office anyone who doesn't display common sense and practicality, and respect for the tax payers. We live in a democratic republic, that means that the majority are not entitled to exercise tyranny over the minority. Tax payers are quickly becoming the minority while tax receivers are becoming a majority. Many of the tax drainers are not actually lawfully entitled to vote. If the tax payers stand together this time they may well restore the balance and protect their minority rights. We simply can not afford to provide lavish life styles for those who vote for a living vice work for a living. But if we don't pay strict attention over the long haul, the reform won't last. There is no easier road to public office than to promise "freebies" from the public treasury. Now is the time to start teaching personal responsibility again, But we must start by restoring national security with a second to none military or we have learned nothing from two world wars.