From the personal E-mail of Editor in Chief Johnas Presbyter

I found the E-mail exchanges quoted below in my personal E-mail. The names of the communicating parties have been removed to protect them from the PC police. There is real food for thought here on subjects from climate change to political analysis and dialogue.


THE WASHINGTON TIMES SOME TIME AGO REPORTED:

"The Arctic Ocean is warming up, icebergs are growing scarcer and in some places the seals are finding the water too hot according to a report to the Commerce Department yesterday from the Consulate at Bergen, Norway.Reports from fishermen, seal hunters and explorers all point to a radical change in climate conditions and hitherto unheard of temperatures in the Arctic zone.

Exploration expeditions report that scarcely any ice has been met as far north as 81 degrees 29 minutes.Soundings to a depth of 3,100 meters showed the gulf stream still very warm.Great masses of ice have been replaced by moraines of earth and stones, the report continued, while at many points well known glaciers have entirely disappeared.Very few seals and no white fish are found in the eastern Arctic,
while vast shoals of herring and smelts which have never before ventured so far north, are being encountered in the old seal fishing grounds.Within a few years it is predicted that due to the ice melt the sea will! rise and make most coast cities uninhabitable.
I must apologize. I neglected to mention that this report was from November 2 , 1922, as reported by the AP and published in The Washington Post 96 years ago. This must have been caused by the Model  T Ford's emissions or possibly from horse and cattle farts."

I found this post most interesting. Seems there have been climate alarmists as long as there has been Climate awareness. One of the responses was priceless and is quoted below. Funny you start thinking about methane gas and really interesting theories emerge. The scary thing is both of these posts are as real as a heart attack!-Johnas
Continue reading for an alternative "theory" ( probably the actual origin of atmospheric methane) that is mind blowing.

Very interesting. Sorry it took me so long to notice this fuel for thought. Here is some more food for thought about the percentage of methane gas in the atmosphere. The percentage of methane gas in our atmosphere is about the same as it has always been since we developed the technology to measure it. The evidence is that the percentage of methane gas in the atmosphere has probably been pretty stable since before the rise of the mammals. So where did the original methane come from?
Believe it or not....termite flatulence ! This is not a joke this is why methane was here before the mammals. The largest biomass on earth is the sum total of all of the termite family. Termites represent more individual members in terms of living species and the combined weight of the global biomass of all the presently living termites exceeds the combined weight of all of human kind and their cattle. Termites have been on earth eating dead vegeta tion and expelling methane for millions of years before man and his cattle, chickens, and hogs appeared. More over termites contribute far more to the maintenance of steady methane levels today than all other life forms and agricultural / industrial activities combined.
We really don't know what roll methane plays in our atmosphere exactly or how its presence contributes to biodiversity. But we know this, it is only after termite provided methane appeared in the atmosphere that biodiversity really exploded.
Makes you wonder; who really is the dominant life form on the planet man or termite? Which species has really had the greatest impact on the planet? We already know the termite family has more individuals , more total weight, a proven beneficial effect on the atmosphere , a probable beneficial effect on biodiversity, and a great capacity to survive humans and their domesticated mammals.
Now personally I think  Im smarter than a termite and that the collective intelligence of the human race is of a wholly different order. Some of us (typically not liberal progressives or other collectivist ) are capable of critical thinking. Real critical thinking requires a heathy dose of humility . Critical thinking allows us to consider the termites and the cosmos . Collectivist thinking likens us to a termite mound in need of a queen. Critical thinking allows us to appreciate the termites and their role in our evolution and appreciate the qualitative difference that has evolved. Collectivist will push us back into the Termite mound where we will produce only flatulence not nearly as useful as that of the termites.
Never forget that in the 2016 election the Communist Party USA did not field a presidential candidate but instead endorsed Hillary Clinton. Now you may more clearly envision where she was taking us.

There is no copyright on this. If after your own critical analysis you find this to be food for thought, please pass it on. 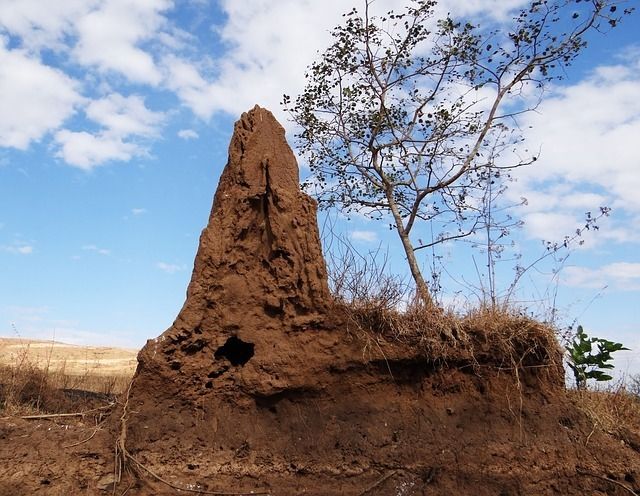 Termite mounds can be as impressive as primative human shelters, and far more complex inside. But do you want to be a drone?


The Great Catfish got into the role of termites a few times in the past, long before we noticed the above quoted exchange:

"But we also mentioned how the planet acquired most of its atmospheric methane content not by man and his domestic animals but from termite flatulence over many more millions of years than any of you mammals have been on the planet. Obviously the Great Dying occurred before any of you bipeds were walking above ground. Scientists have long wondered about the "Great Dying" and most often in the past speculated that the event was related to one of those macro agents of climate change. Our discussion of termite flatulence was the first hint I issued that sometimes agents of macro climate change can be micro in nature. Now a number of scientist reviewing the latest data on the Great Dying are starting to theorize that the cause of the macro climate change was indeed micro in nature, indeed smaller individually than the termites ,which by the way, survived the "Great Dying". https://americanadmiraltybooks.blogspot.com/2018/12/the-great-namazu-explains-great-dying.html