A PERIODICAL REVIEW : "GAFF" A NEAT ON LINE FISHING MAGAZINE 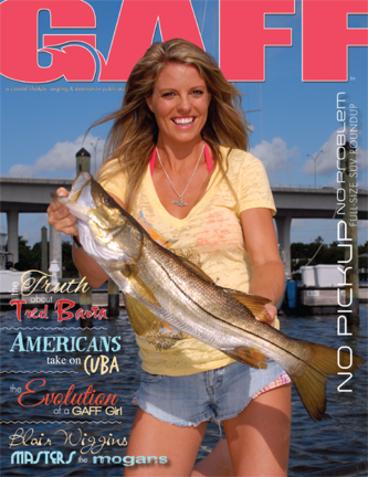 Gaff Magazine has taken as its mission "to be the voice for the legitimacy of lady anglers everywhere. "  We here at American Admiralty Books have always believed that there are plenty of lady anglers out there who qualify as serious fishers in no need for a man to bait hooks or drive the boat. We like this quote from the editors:

"If you think we’re referring to that stereotypical girl who just likes to join her boyfriend for a day of sunbathing, while he casts around killing time, until a cloud interrupts her sun and she finally decides to reel in a small trout… you would be way off. Don’t underestimate the seriousness and determination of this new breed of lady angler. They don’t want merely to partake in the sport as if it’s just another pastime — they want to master it.

And so guys Gaff while aimed at the ladies, is full of good technical information. Recently we read a feature about catch and release. We doubt that a fishing magazine aimed at men would have devoted quite so much time and detail to releasing fish alive. But we have no doubt that the techniques described and illustrated would assure much higher survival rates for released fish. We have to give GAFF our highest rating for a periodical, American Admiralty Books Recommended, and that's not a gender specific rating.