Editorial Note: We first published this in August of 2012. We had about 500 visitors that entire month. Now that we have over 14,000 visitors a month we thought this would be a good time to run it again and once more ask for comments. Nothing new has been done on the issue since we first proposed a Whale VTS or integration of migratory marine mammal information into coastal navigation information systems. It's still all about new uses of existing and evolving system for collision avoidance to include whales.  Let us have your thoughts.-Johnas Presbyter, editor

Admittedly the last time we wrote about marine mammals it was to post a video of one supposedly eating a human being on a beach. But we humans have taken far greater tolls on the marine mammals than they have on us. With the exception of the Japanese ( We like their Maritime Self Defense Force, but hate their Whaling Fleet), we have mostly given up on our campaign of total genocide on the marine mammal  species. We think that is a good thing. We're not purist or whale huggers , we have no objection to Arctic natives hunting marine mammals using traditional native methods. Going after these giants in low free board small boats, across freezing seas, using hand thrown harpoons looks like the enterprise leaves some question as to who exactly will survive the encounter. That somehow appeals to our sense of fair play, and Arctic natives have to eat. They are certainly in no position to grow corn. 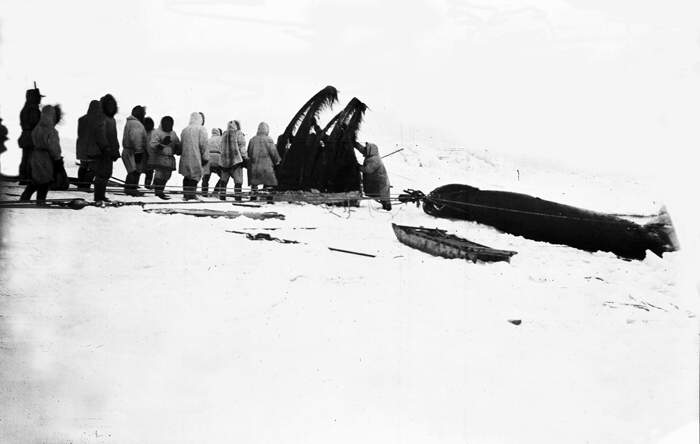 
So with all but one participant in the genocide of the two legged intelligent mammals against the no legs intelligence on this planet resolved in favor of letting the legless live; the biggest or possibly the second biggest killer of the legless, (before or after the Japanese whaling industry, depending on who is doing the counting)  appears to be unintentional ship collisions with whales. Both whale and ship traffic along traditional whale migration routes are increasing. Here is a link to a recent account off of California (right after the dog food commercial) :  http://www.aol.com/video/endangered-whales-seen-off-calif-coast/517452566/?icid=maing-grid7%7Cmain5%7Cvideo-module%7Csec2_lnk1%7C195252 The desired future condition of the Japanese whaling Fleet


We have marine sanctuaries often policed by the vessels commanded by the uniformed NOAA Corps but the sanctuaries are mostly enclosing feeding, breeding, congregating grounds , the marine mammal equivalent of singles bars, restaurants, and coffee houses. Everyone has a good safe time while on the premises but you have to take your chances in the traffic between gin joints. Like the traffic coming in and out of human entertainment districts the density varies being heaviest at some fairly predictable times. There is no if, but, or maybe about it, the leviathan's have to share the long migratory routes with the biped's shipping. Of 77 strategic materials that our economy has to have 66 must be imported by sea. Rest assured that we are not going broke or hungry so that the krill eaters can have our coastal shipping routes to themselves while traveling between protected entertainment zones.

What is needed is a seasonal, well designed joint USCG and NOAA Corps run vessel traffic management system  for the whale /ship super highways. We have the technology but we seem to lack the will and we definitely have a strapped budget. Ships today are equipped with AIS (Automatic Information Systems) that broadcast their whereabouts. Around the United States we have well established local Coast Guard operated Vessel Traffic Services with 24/7 manned Vessel Traffic centers. NOAA already has the knowledge of the whale's basic migratory patterns and the start and stop dates within a few days of variance each year. Advance planning is possible at least in terms of annual averages. While most port area collision avoidance / port security orientated VTS centers communicate with participating vessels on relatively short range VHS marine radio, most seagoing vessels carry  the more long range Single side Band (SSB). Installing SSB capability in a VTS which doesn't already have it should cost about at most a couple of thousand dollars not millions and only a few are needed. The migrations are seasonal and in any one vicinity last only a few weeks at best. Manning of the extra radio console in the VTC could be by Coast Guard Auxiliary volunteers.
NOAA has the air assets and expertise to verify the migratory path's geographic limits. The Coast Guard can communicate any changes to coastal shipping routes to keep the ships and whales parallel to each other and safely separated. Crossings into ports would have to be transited at slow speed with extra look outs.


Since most of the migratory routes are within our OCS or EEZ waters little or no new regulations are required to establish a Coast Guard "moving security zone" around the whales. Patrol duties could be shared between surface vessels and air craft of the USCG, NOAA, even some cooperative elements of
state and local agencies, and the Coast Guard auxiliary. We actually do some of these things now as local volunteer efforts by some shipping companies, local Coast Guard initiatives, and other local interests. Unfortunately many of these efforts are based on whale casualty records and occur in areas where too many whales were lost in the past. It is time for a nationally coordinated, internationally cooperative effort to separate and manage the seasonal traffic in the coastal migration routes. Internationally the adjacent coastal states need to take the lead within their own OCS and EEZ waters. The United States has thousands of miles of whale routes within its waters, other routes are more truncated by adjacent coastal states and will require more cooperative arrangements.

Take a few minutes and look at the linked video to understand how close to shore some of these whale migratory routes are and the dangers the whales face even without the hazard of being run over by a ship:  http://www.youtube.com/watch?v=Hcz0zrDTZBw . The Grey Whale is the more common traffic generator on the West Coast migratory routes but, the submarine sized and much rarer Great Blue is the tandem 18 wheeler equivalent out there in the traffic. Watch this video of the Great Blues in transit off of California and note in the early frames the proximity of a large container ship.
http://www.youtube.com/watch?v=jcSQGw2Svjs  Another question we have to resolve is the issue of small craft approaching these creatures. Here is another video of the Giant Blues in migration in close proximity to small craft, it should give any vessel traffic system planner food for thought.
http://www.youtube.com/watch?v=MldF7ZWJ5Ps&feature=relmfu   We believe that the time for thought has already reached the stage where it is time for planning. We are certain that a vessel traffic system for protecting migration routes is possible without any new technological developments and that the necessary technology is inexpensive and the seasonal manning costs reasonable. What has been lacking is the will to do it. In times of tight budgets there are many competing demands for tight government funds. But then one of the elements in the public discussion that we would like to see started is can this effort be funded privately? The law enforcement power of the government is needed. The existing vessel traffic center bricks and mortar would be handy. But the communications equipment acquisition expenses are within the range of many academic grants. A legal frame work pretty much exists but some research well within the range of lawyer volunteer efforts is needed to coordinate the regulatory frame work. Government doesn't necessarily have to do the whole project out of tax payer money. Here again we come to the issue of smaller craft and whale proximity. Generally the Whale Watching industry has been good for the whales. Perhaps that industry's greatest contribution is still in the future as the source of seed money. But the industry is highly unlikely to support efforts that eradicate it. Perhaps a bit like modern day "reality show" stars the Whales may actually be better off with a little intrusion into their privacy. Drop us a comment let's get the discussion started.

Posted by American Admiralty Books at 1:27 AM