FOR USE INSIDE U.S. HARBORS 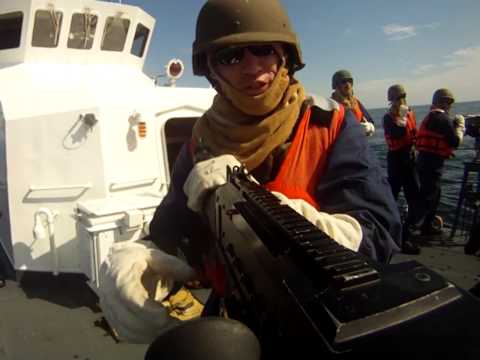 Just visit "Ego Alley" in Annapolis during any water oriented public event and you can see that the Coast Guard has, for years since 9/11, been fielding small fast patrol boats with belt fed automatic weapons mounted. We don't have access to any current Coast Guard use of force policy documents but with these vessels patrolling even yacht harbors from time to time, and knowing what we do about the Coast Guard we feel confident in presuming the following.

(1) The weapons really are necessary given the terrorist threat. Coast Guard patrols have been routinely armed for decades now, the practice started with concerns over run ins with drug smugglers. During the era where the primary rationale for arming domestic waters patrols was the maritime drug trade the weapons load out was pretty light an M-16 , A Shot Gun, and a Service Pistol. Since 9/11 even very small rigid inflatable outboard propelled Coast Guard patrol craft usually have belt fed mounted automatic weapons of one sort or another.

(2) The crews manning the weapons are basically trained in use of the weapon, marksmanship, and the Commandant's Use of Force Policy as well as any local commander's or situation specific additional rules of engagement.But these crews are not particularly well practiced by military standards. Compared to Department of Defense crews that routinely use belt fed automatic weapons Coast Guard crews are hard pressed for places and opportunities to practice. Recently Great Lakes environmental and recreational boating interests protested vehemently against machine gun practice by Coast Guard units in specially designated areas of the Great Lakes. Similar public opinion and available open water range opportunity limitations are operable all around the nation. Developing the kind of combat situation awareness that allows a gunner to make good decisions about available back stops, likely fall of shot, and other decisions that limit collateral damage while effectively returning disabling fire in a domestic harbor that may have heavily populated industrialized activities, and even residential neighborhoods and schools within gun range requires an awful lot of proficiency practice that is not currently available to Coast Guard crews.  To some extent the Coast Guard makes up for this with very restrictive "Use of Force" Policies / "Rules of Engagement". These help keep the public safe from accidental or mistaken discharge. But a culture of highly restrictive rules of engagement can result in undesirable consequences in actual combat. In a Coast Guard / maritime terrorist gun fight in a U.S. harbor the following public concerns must be addressed.

(a) There will be zero tolerance for enemy "blow by", that is boat carried terrorists getting past Coast Guard forces and living to destroy or damage their objective or kill / injure American citizens or visitors.

(b)  There will also be zero U.S. public tolerance for "collateral damage"or "friendly fire" incidents during a domestic in harbor fire fight.

Given what we know we feel strongly that the following are in order.

(1) By all means the Coast Guard should acquire more accurate machine guns for domestic patrols. But this should be only part of an overall upgrade in inner harbor patrol military / law enforcement readiness.

(2) Tactical doctrine consistent with winning against all odds and yet not inflicting collateral damage on U.S. property and citizens should be developed and taught. A simple example of such tactical doctrine would be "the fire at the hull preference" for small boat to small boat combat. If a patrol is justified in opening fire on any vessel that they have not boarded, such as when receiving fire from an advancing vessel, the preferred target is the hull of the attacking vessel. It is the larger more absorbing target and rounds sent into the hull are more likely to find their mark, cause damage and even kill or wound the opposing gunners.  The preferred position for the "select" (mode of fire) switch on guns responding should be "automatic". If the hull proves armored, it may be necessary to fire at the much smaller , fast moving, and bobbing targets of the exposed heads of the enemy shooters. Now the chances of success ( defined as stopping the advance of the enemy boat and disabling the weapons or shooters ) goes down and the chances of collateral damage go up. If automatic weapon fire is used at all it should be in well aimed three round bursts. Single shot responses would be preferred and attention paid to back stops. If there are any engine components exposed automatic weapon fire may usually  be directed against  these.  Assuming that rounds can penetrate the hull, lots of automatic rounds directed into the hull have the opportunity to stop guns, gunners, propulsion engines, and near the waterline swamp the boat. The objective is always to stop the advance of the enemy, stop his shooting. Whether the enemy is killed or wounded at that moment is immaterial, but collateral damage is never immaterial. Collateral damage amounts to the defenders doing the attacker's work for them.

(3) The kind of instinctive reactions under the heat of fire that we described above can only be expected from proficient troops not just trained and "qualified troops". The Coast Guard needs more places and opportunities to practice to the proficient level not only in the application of use of force doctrine and basic marksmanship, but in tactical combat through under way live fire exercises. This means time, money, and public tolerance for a place to do such.

(4) The Coast Guard will never be able to control the ruthlessness and inhumanity of the enemy. While Coast Guard patrol elements may be able to void causing collateral damage, they can't control the enemy's total lack of concern for where their shots go. In the event of any such action district public affairs officers must be prepared to explain that fact of life to the American public.