ACTUALLY THEY ARE BACK! THE 2013 Great White Shark Beach Invasion So Far

SHARKS.....our bad we spoke too soon! 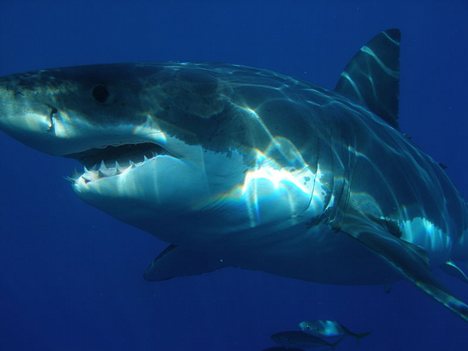 Scrolling through last summer's posts we noticed that in July and August last year the great white sharks were making appearances in several places. BECAUSE BY JULY 18 THERE HAD BEEN NO GREAT WHITE SHARK SIGHTINGS REPORTED WE SPECULATED THAT MAYBE THIS YEAR THE BEACHES WOULD BE FREE OF MAN EATING APEX PREDATORS. WE SPOKE TOO SOON THE VERY NEXT DAY THE EVENING NEWS CARRIED PICTURES OF THE ARRIVAL OF THREE GREAT WHITES OFF OF CAPE COD.

The most amazing thing about this event in our minds was the news coverage of the new warning signage appearing on beaches in the cruise zone of the Great Whites that have been confirmed by visual sighting and even photographed. Are you ready.....(drum roll please...) "PLEASE LEAVE SHINNY JEWELRY AT HOME AND AVOID SPLASHING". To local beach authorities for this signage we would like to say .....
ARE YOU CRAZY, STAY THE HELL OUT OF THE WATER NUMB SKULL! We here at the AAB are maritime professionals. We have dealt with apex marine predators before. Our advice is below, as we offered last year, as we offered on July 18, of this year in the hopes then that it wasn't necessary, as we will will always offer it. Great whites and killer whales have evolved into apex predators over thousands of years. We don't expect to see them morph in our life times into vegetarians, so we don't expect to change our advice. Below we report our some what more complex explanations and warnings.


Make no mistake about it, Sharks bite. Especially the Great White Sharks aka Carcharudon Calcharias. They bite seals, dolphins, whales, fish, rays, and yes, humans.   Fortunately, humans don't profile like preferred prey.  Many humans have escaped death after an attack because they were not consumed.  Its not clear if the Great White finds us too bony for his taste, or just doesn't like the flavor of wet suits.  Last summer the Discovery Channel ran its ever popular SHARK WEEK:    http://www.youtube.com/watch?v=UecQ-mM6Tjk&feature=relmfu  We haven't seen it advertised so far this summer. Lets hope that no news events trigger a rerun.
Last summer the real thing was spotted off of some popular New England beach resort communities. http://www.dailymail.co.uk/news/article-2170272/MORE-great-white-sharks-spotted-Cape-Cod-beach-goers-dip-hesitantly-areas-water.html

We have August yet to go, and the big guys are at Cape Cod confirmed. Despite our earlier conjecture this summer will not be free of large apex predators at some U.S. local beaches. Check the beach warnings with a grain of salt, if they mention leaving glittering jewelry at home or avoiding splashing. Assume its a gross understatement of "Swimmers subject to being eaten without prior notice".

So just when you were thinking of getting in the last of the surfing, sailing, snorkeling, or diving of the season, if you s
suddenly find that your local beach is in the"infested" area, you have to balance off the enjoyment against the very real possibility, even if low probability, of being eaten or at least bleeding to death from a "test bite". All this just when you were thinking it's safe to go in the water. So like any thinking and computer literate  human concerned with marine issues you come to American Admiralty Books seeking answers. Well here is our response:

IF YOU ARE CONSIDERING WATER ORIENTATED RECREATION IN ANY AREA WHERE GREAT WHITES HAVE BEEN SPOTTED LATELY RECONSIDER! FIRST THE OBVIOUS; AVOID SWIMMING, SNORKELING, AND
DIVING OR ANYTHING ELSE  THAT GETS YOU IMMERSED IN THE WATER.
If you want to get immersed now is a good time to visit a swimming pool or water park. If you choose to go to the beach anyway, take a good look at what you are sharing the water with:

http://www.youtube.com/watch?v=NEOunA3tfqg&feature=related
So what about surfing? You're not exactly immersed right? Wrong Snakebite! When Great Whites have been spotted in an area they are usually the big ones. After one of these beasts reach the 13 foot level their "preferred prey" are marine mammals, large marine mammals. Your surf board propelled by your arms will look a bit strange but not terribly unlike a small whale. The Great White can probably  sense your heart beat through the board. The heart beat won't profile like a whale or dolphin exactly, but close. You are inviting a "test bite" will you survive it? Possibly. Will you survive it without injury, not very likely. If nothing else consider post traumatic stress syndrome. Few life experiences are more traumatic than just narrowly escaping being eaten alive. So really if these proven man eaters are known to be in the area the water is theirs!  Stay dry or confine your immersed activities to the pool or or bath tub.

OK what about cage diving? Geez Goldfish are you back
again? Weren't you listening in both the Diving Section and the Technical Diving Section. Believe me cage diving is technical diving, what did we say about all forms of technical diving Goldfish? NEVER EVER EVER TRY ANY FORM OF TECHNICAL DIVING WITHOUT EXPERT INSTRUCTION AND MAKE SURE YOUR FIRST ACTUAL ATTEMPT AT ANY FORM OF TECHNICAL DIVE IS INSTRUCTOR SUPERVISED. THAT'S EACH FORM GOLD FISH; JUST BECAUSE YOU'VE DONE CAVE OR WRECK DIVING DOESN'T MEAN YOU ARE READY FOR CAGE DIVING. GET A GRIP GOLDFISH! WHAT PART OF STAY OUT OF THE WATER DID YOU NOT UNDERSTAND?

OK, so what about sailing or boating? First stand up paddle boards aren't boats. The bigger Great Whites have been known to attack boats on rare occasions. Sometimes this has been the result of fishing activities that have drawn prey species near the boat, other times it is in response to actually being hooked, but occasionally, the attacks appear to have no reason. Some scientists speculate that the Great White is attracted or annoyed by the electrical pulses coming from larger boats. Surely a kayak or Sunfish,  or other "board boat" is not what you want to be out on when the Great Whites are about. Certainly you are less likely to be eaten aboard a 40 foot Morgan, especially if not running all sorts of electronics and not fishing from it than you would be in a kayak. Take a good look at what a Great White Attack is like when aimed at a human:http://www.youtube.com/watch?feature=endscreen&NR=1&v=N2v9XDBFR6g

Now of course we here at American Admiralty Books are licensed, certified, and experienced mariners, and divers. What do we do when we had planned boating or beach activity and Great Whites are reported in the area? THAT'S WHEN WE HIT THE GOLF COURSE ! We of course find being eaten by a fish to be unprofessional for professional seamen.

Posted by American Admiralty Books at 1:01 AM