A GAME OF SHARK AND MINNOWS
http://www.nytimes.com/newsgraphics/2013/10/27/south-china-sea/

The Spratly Islands Dispute Between China and the Philippines Explained with Maps, Photos and Video. 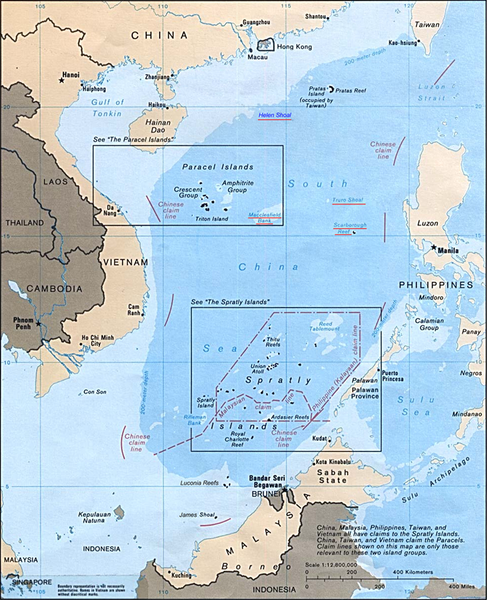 The Spratly Islands are mostly uninhabited, some are almost within sight of the Philippine China Sea beaches. At least one is inhabited by Philippine nationals and several have long been under the administration of a single Philippine municipality.  Most of the islands are well within the Exclusive Economic Zone of the Philippines as constructed and submitted under the current United Nations Law of The Sea Convention. By codified modern international law most of the Spratlys are internationally recognized as Philippine territory. In the linked article by the New York Times News Graphics Service the situation is explained in text with kind of detail that only print media can provide, but in an unusual mix of computer format mixed in with the explanation of the dispute in text there is a story in video, still photography, scrolling text and sound of a visit by the relevant Philippine mayor to a derelict naval hull on which eight Philippine marines live in isolation and utter squalor in a seemingly never ending stand off with Chinese Coast Guard units claiming a collection of barely emergent rocks clearly owned by the Philippines. The text is extensive and clear, the photography vivid. This is the best explanation and detailed background article we have found on the Spratly Islands dispute. We urge you to click on the provided link, check it out and book mark it for future reference as the situation in the China Seas continues to unravel due to Chinese maritime aggression.To move through the presentation simply scroll down when ready, the site handles the transition from one media to the other flawlessly , just scroll down when ready. If you forget to book mark the story we will be indefinitely retaining it on our News page.