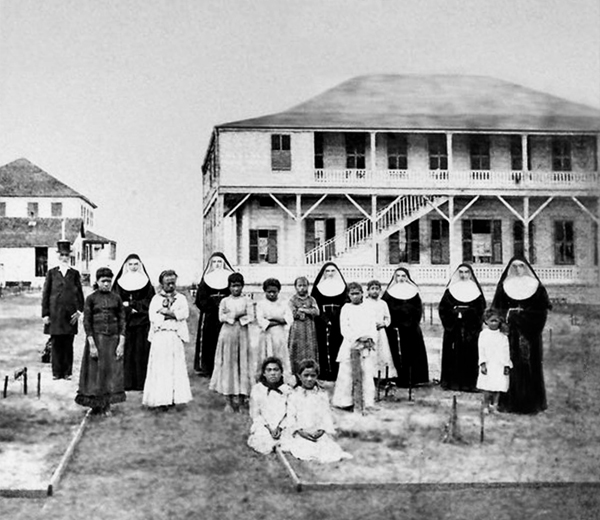 Updated 5/9/2018
This blog was originally run prior to the Presidential election of 2016. the subject was the contribution of Christian organizations to shaping American health care and the threats they faced under Obama Care. Fortunately Trump won, but to this date obstructionist in Congress still block the repeal of Obama care and the threats described to the America's extensive Christian medical establishment continue, reprieved temporarily only by the present administration's policies. The onerous law continues thanks to the savagely anti religious Democrats.

EDITOR'S NOTE 4/11/2020: Unfortunately not only did Americans fail to remove from office the anti Christian members of the Democratic Party but in fact gave the Democrats a majority in the house. Consequently there is no progress to report on the problems described in this post. However the fact about Christian contributions to America especially in health care and education remain as described.

The Charity Hospital run by the Sisters of Charity in New Orleans along with the Upjohn company developed the plasma system in the 1930s that saved so many lives in WWII , Korea, and Vietnam. During the Civil War most of the professional nurses in the US were nuns. When the Catholic Church was founded 2,000 years ago there were no hospitals. Today one out of five people receive health care in a Catholic hospital and many of the remaining four receive care in Baptist and Methodist hospitals. When the Catholic Church was founded education for the elite few who had any formal exposure was by private tutor, there were no schools as we know them. The Presbyterian Christians in the United States literally started what is now the public school system from which later God was expelled by the Secular Humanists, America's de facto official religion. The Catholic Church today teaches over three million students a day in its more than 250 Catholic Colleges and universities in America and in more than 1200 Catholic high schools, and five thousand Catholic grade schools. Hundreds of thousand more students are taught in Protestant Christian schools at all levels.

Every day the Catholic Church through Catholic charitable organizations feeds, cloths , and houses more people than any other organization in the world, but they are not alone in Christian charity, every Protestant denomination runs missions for the needy and homeless. The American Red Cross was organized by a Protestant Christian and displays the symbol of Christianity. The continuation of Obama Care could end all of this, especially the Catholic contribution since it mandates that religious based medical organizations must violate their beliefs if those beliefs can not accommodate abortion on demand, birth control, and other elements of ethical behavior not favored by the secular humanists. Catholic and other Christian adoption services that will not place adoptable children with gay parents will be forced to shut down operations.

Yet, there are more than 77 million Catholics in this nation and only 50 million Catholic votes are needed to elect a president, yet among Christians in the country Catholics are still a minority. Catholics and Evangelicals share nearly identical views on abortion, gay adoption, gay marriage, etc.. While other mainline Protestant congregations may demonstrate more or less differing views in these key areas it is obvious that if Catholic and Evangelicals alone turned out to vote their religiously informed consciences in anything like a majority of their numbers, they alone could elect the President of the United States. Yet Obama said we are "not a Christian nation". Why then does he hide his commitment to the Muslim  creed?

Think about this when you go to the polls in 2018. Turn out all office holders who do not demonstrate respect for the Christian contribution to America, and how it virtually defines what has come to be understood as the "American Way Of Life". `As one recent writer addressing President Obama when he was in the White House put it:

Mr. Obama you said "The USA is not a Christian Nation". You are wrong, we are a Christian nation founded on Judeo-Christian values allowing all religions in America to worship and practice freely. Something that Islam will never do. Oh, by the way, on MUSLIM HERITAGE" in America ....Have you ever been to a Muslim hospital, seen or heard of a Muslim Charity that offered anything to non Muslims, heard a Muslim Orchestra, or seen a Muslim band march in a parade? Ever seen Muslims shaking hands with a Girl Scout or seen a Muslim candy striper working in a hospital? Have you ever seen a Muslim do much of anything that contributes to the American way of life except for those few inside Islam who are critical of it, try to bend it towards more humane ways, and are hunted, persecuted, and sometimes murdered, even in this country, for their efforts?

Remember all of this in the coming elections! Don't put anyone in the White House who is just a branch off of the Obama / Hillary's creed, party, and belief system which is surely anti Christian. Have you ever noticed that in every church and synagogue in America there is an American flag, something you will not see in any American mosque. They are telling us something, their so called "religion" prohibits real allegiance, or loyalty to America, and insists on Islamic law over the Constitution of the United States. Nothing in our Christian or Jewish beliefs fosters disloyalty to our nation, or requires us to overthrow the Constitution. Why are we tolerating such behavior from others?