WAS OBAMA ELIGIBLE FOR THE OFFICE HE HELD

Greetings Bipeds!
For more than six years now I've been picking up on the fact that quite a few Americans think their immediate past President was ineligible for the office he held due to the Constitutional requirement that the American President be a "natural born American citizen". The official Democratic Party / Obama Administration line was that the President was born in Hawaii which of course would make him a "natural born American Citizen". I've been pretty much silent on the issue because frankly throughout their historical existence, remember I'm 3,000 years old so I've seen it all; I've never trusted the American Democratic party but couldn't believe they wouldn't thoroughly vet a candidate for President.  So really for the last six years or so I've been ignoring the issue. It just seemed to me like sour grapes from certain elements of the American Republican Party.

First there were claims that no one had ever seen his birth certificate, than an argument over producing one, then one was produced and arguments erupted over its authenticity. So I'm thinking "sour grapes". Then there was the claim that Mr. Obama attended a college while receiving aid designated for foreign students and claiming to have been a citizen of Kenya. However the pertinent University declined comment and the relevant agency did not produce any documents. Some copies of documents and photos were bandied about the Internet, but you really can't trust those. So as 2015 dawned with the same occupant in the White House I was pretty much of the opinion that while the present occupant is without doubt, in my opinion, the most incompetent man to ever occupy that edifice, he was at least legally entitled to be there. Being known for my insistence on basing my opinions on verifiable facts I was petitioned by a number of "Birther" readers to review the evidence and render an opinion. I value reader input and decided to do as requested. Below is my analysis.

First I have to reject all allegations such as the attending college while receiving financial assistance as a "foreign student" and claiming birth in Kenya.  The documentary evidence offered isn't authenticated and the silence from the relevant university and federal agencies cast no light on the matter.  The evidence for this charge is underdeveloped to say the least . The Birther crowd may be livid and hear the institutional silence on this issue as a deafening affirmation of guilt, but that's not good forensics. I have to stick with good forensics. Here is what is left of the "Birther arguments" as verifiable facts:

1. On the Birth Certificate released by the White House, the listed
place of birth is "Kapi'olani Maternity & Gynecological Hospital".

The hospital in fact, in 1961, the claimed year of Mr. Obama's birth ,was called "KauiKeolani Children's Hospital" and "Kapi'olani Maternity Home", Respectively. The name did not change to Kapi'olani Maternity & Gynecological
Hospital until 1978, when these two hospitals merged. How can this
particular name of the hospital be on a birth certificate dated in 1961
if this name had not yet been applied to it until 1978? A not illogical implication is that the document is the product of forgery by a rather young person connected with the Obama camp who did insufficient historical research before creating the document. Good forensic practice would allow the presumption of inauthenticity for the birth certificate presented by the White House.  You can verify the sequence of the hospital name changes at any of the links below:

2. Mr. Obama's 1961 birth certificate as presented by the White House indicates he is an "African American" a term that was not in general use in 1961. Official documents of the time refer to people of  color of African origin as "Negroes". The term was first introduced in a speech by the Rev. Jesse Jackson in 1988 urging its  use when referring to "Black" Americans. To verify:   http://www.aaregistry.org/historic_events/view/african-american-term-brief-history http://www.aaregistry.org/historic_events/view/african-american-term-brief-history   Mr. Obama seems to have possibly the only "African American" birth certificate issued in 1961. Good forensic practice would allow the presumption that the document is not authentic.

3. The birth certificate that the White House released lists Mr. Obama's father as  Barack Hussein Obama, states his age as 25 and that he was born in "Kenya, East Africa". Unfortunately, in terms of documentational authenticity "Kenya" wasn't formed until 1963, prior to 1963 it was known as "the British East Africa Protectorate". You may verify that fact at:  http://en.wikipedia.org/wiki/Kenya_%28http:/en.wikipedia..org/wiki/Kenya%29

That pretty much sums it up. Having rejected all of the arguable, or more difficult to verify allegations and sticking with only the obvious and easily verifiable I have to conclude that it appears more probable than not that the birth certificate of the immediate past occupant of the White House is a fraudulent document. I am aware that the American media has not challenged the Obama establishment on these facts. It would be pure speculation on my part if I were to assert that the media is negligent, incompetent, or in collusion in defrauding the American electorate. I do feel confident and well within the bounds of prudence and good forensic reasoning to suggest that the American public should demand explanations from both Obama and the American news media.

Thank you for your inquiries, I hope the above and foregoing adequately responds to your concerns. 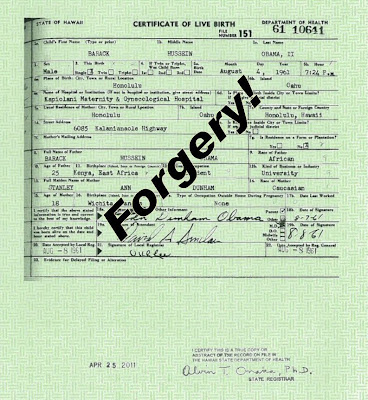