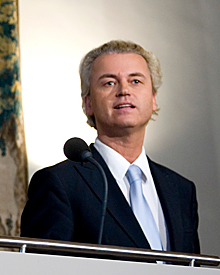 
Dutch MP Geert Wilders went on trial for the second time last Spring in the Netherlands for speaking the truth about Islam, particularly the problems being caused in the Netherlands by the large mostly non citizen Moroccan population. On December 8, 2016 he was convicted by a cowardly and Islamic influenced corrupt Dutch court for a "Hate Crime". Geert, a leading member of the Dutch Parliament maintained and continues to maintain that as an elected representative of the Dutch Citizenry he a right, a duty, and an obligation to frankly discuss social issues such as the crime waves sweeping the Netherlands directly resulting from Islamic immigration, legal and illegal.

That there is a massive crime problem attributable to the Moroccans and other Muslims can not be denied. As a member of Parliament Mr. Wilders  is obligated to discuss public issues. However, in the Netherlands today, as in a growing number of rapidly Islamifying EU nations , frank discussions about the effect of Islamic populations, many of them illegal aliens or non citizen residents, is politically incorrect,  Now governments are openly enforcing political correctness and as a biproduct Sharia Law. Sharia Law , the law of Islam disallows any criticism of Islam.  In the West today there is one and only one group about which disparaging public speech is allowed, white males. This trial should have been the European trial of the century but it got little play in the liberal; media of the U.S. and the EU.

Mr. Wilders has previously addressed American audiences about the experience of the Netherlands with a large resident population of Muslims and predicted that within 12 years Europe as it has been known for hundreds of years will be no more and in its place will be an Islamic society. He has predicted that America will be the last to fall, but warns that if we do not start taking action now that fall will come much sooner than later. The PC crowd in the Netherlands moved right along with their second prosecution of Mr. Wilders, this time they put him before the PC equivalent of a "Hanging Judge". We think his opening statement rings true, a truth that needs to be told and defended, he is speaking for Western Civilization, a civilization rapidly assisting with its own conquest. We present his unedited opening statement for your own considered review.

"Mr President, Members of the Court,

Thank you very much."

LINK TO WILDER'S POST SENTENCING SPEECH TO THE PEOPLE AND THE COURT:

“truth and liberty are stronger than you”