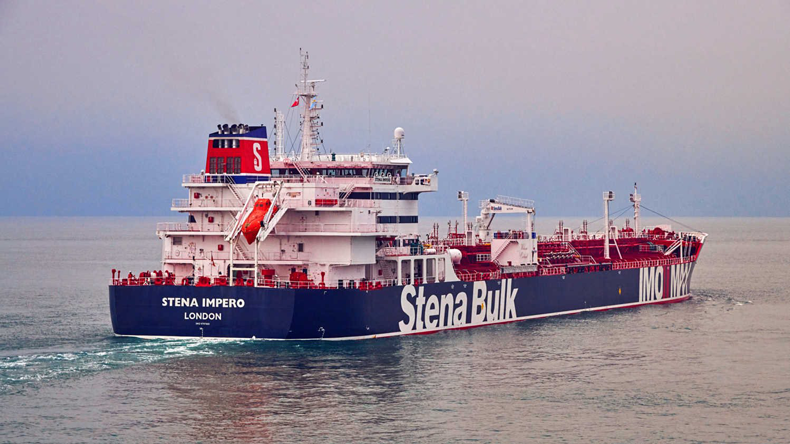 Word came in today of another Iranian Revolutionary Guard provocative incident. They seized a British tanker in the Strait of Hormuz. This time the "Guard"seized a "British Tanker"  the STENA IMPERO claiming that the tanker "violated international law" and entered Iranian territorial waters. Actually ships my enter the territorial sea of a nation that they don't intend to visit for such mundane reasons as to utilize an aid to navigation. Passage must be innocent but there is no automatic right to seize a ship simply because it has entered your territorial waters which now extend to 12 miles offshore.  (See THE ENDURING PRINCIPALS OF MARITIME INTERNATIONAL LAW in our Admiralty and Maritime Law Section , scroll down to find)
Publicly available vessel tracking information indicates that the ship "veered" off course ( see "Vessel Traffic and Tracking Services" ) . This could be a navigational or conning error, mechanical error, or the ship may have wanted to utilize an aid to navigation. What is highly unlikely is that the ship in any way intended harm to Iran. The STENA IMPERO was bound for Saudi Arabia , the port of Al Jubali. Saudi Arabia is of course embroiled in disputes with Iran at this time. There has been recent bad blood between Great Britain and Iran as well. On July 4, 2019 Royal Marines seized the Iranian Tanker GRACE 1 off Gibraltar for illegally transporting oil to Syria
According to a company statement the ship was "approached by unidentified small craft and a helicopter during a transit of the Strait of Hormuz, while the vessel was in International waters."
If the ship actually was in International waters at the time the Guard took it, there is not even an argument that can be made that the seizure was legal. At this time the ship is headed under escort into Iranian waters and the owners and Western naval forces have no communications with the ship or any of the 23 crew members aboard.
We will post more as information develops.

Interesting analytic article in the Guardian. https://www.theguardian.com/commentisfree/2019/jul/20/new-pm-take-note-iran-crisis-could-escalate-into-war  by Alan West

Update 7/19/2019 1520 CST:  President Donald Trump told reporters at the White House today that he will be “working with the U.K.” on the incident. “This only goes to show what I’m saying about Iran: trouble, nothing but trouble.” Note Great Britain could call on the US for assistance via the NATO treaty if armed conflict breaks out. gCaptain rewports that despite British registry the tanker owner is Swedish see: https://gcaptain.com/trump-stena-impero-iran/?utm_campaign=twitter&utm_medium=twitter&utm_source=twitter

Update 7/19 2019 1530 CST: Statement by the 200 member UK Shipping Organization   https://twitter.com/ukshipping?lang=en calling for a "measure response" but noting the action represents an escalation in tensions and calling for more security for merchant shipping in the area.

Update 7/19/2019  2200 CST: Russia has publicly taken note of the situation and is warning that the situation is close to war. By contrast  former US National Security Advisor Susan Rice has stated “These incidents in isolation are not especially alarming,”  But, she added, “In the aggregate they are, given that we’re dealing with players that have little interest in deescalating.”

Update 7/19/2019  2220 CST: It is now reported by CNN that the Revoluntary Guard comfirmed the capture of a second tanker today the Liberian flagged M/V MESDAR. It is not known at this writing if the MESDAR was captured before or after the British STENA IMPERO. Libera maintains an open registry with few if any ships having any ownership in Liberia. Liberia doesn't have a navy of any note , nor do they have any history of stern measures to avenge insult to their rent a flag.  The seizure of a Liberian registered ship simply doesn't draw the media attention that the seizure of a NATO member ship does. At this writing we have no idea which ship was taken first.

We are now signing off for thew night. for an excellent "backgrounder" on this incident see DAILY BEAST post "Tanker War 2.0 at https://www.thedailybeast.com/iran-seizes-british-oil-tanker-stena-impero-escalating-tensions-with-western-powers

For continuing coverage of events we suggest gCaptain https://gcaptain.com/trump-stena-impero-iran/?utm_campaign=twitter&utm_medium=twitter&utm_source=twitter
Update: 7/20/2019  0900 CST: New Rules of Engagement for U.S. Naval vessels in  the Strait of Hormuz: As of last night U.S. naval vessels in the Strait of Hormuz may fire upon small craft and other vessels if fired upon or threatened. They may also fire upon vessels attacking American Vessels only. There is no pre existing permissive authority for American warship commanders to come to the aid of non U.S. merchant shipping.
American Commanders have been advised by command authorities to avoid confrontation, but to defend themselves.

Update: 7/21/2019  1000 CST: It now appears that the Iranian tactic for the seizure of large tankers is to surround the merchant vessel with armed small boats and then send down an armed boarding party by helicopter.

IRAN TAKES ANOTHER TANKER: THE MARITIME EXECUTIVE HAS THE STORY: https://maritime-executive.com/article/iran-claims-it-seized-small-tanker-for-fuel-smuggling

Of Interest From the BBC:

UPDATE: 7 / 24/ 2019 Ship owners confirm phone contact with crew. The owners of the STENA IMPERO confirmed that they were in contact with the crew of the impounded vessel and it appears that contact is continuing and repeatable for the time being. According to reports by the ship's owner Stena Bulk the Master reported that all crew members were safe and are aboard the impounded vessel with Iranian security personnel aboard. The telephonic communications came as the head of the Iranian supreme leader's office announced that the UK was sending mediators to negotiate for release of the vessel.

UPDATE: 7/25/2019 American naval forces in the vicinity of the strait of Hormuz will provide allied merchant shipping with relevant intelligence but will not provide escorts. Operation Sentinel is the U.S. Navy's name for the intelligence sharing operation does not include escorts shipping interests are advised that escorts are highly desirable but that the US will not furnish such except for US flagged shipping.

OUR ANALYSIS: Too much of today' shipping is moved by "open registry" shipping. Such registries as Panama, Liberia, Cypress and others have no real ownership connection to the ships flying their flags. These registry states have little or no naval power and do not promise any naval protection to their shipping. The Iranians have already seized a Liberian tanker and won't hesitate to take open registry shipping. Most of America's commerce is carried by open registry shipping. Congress over the decades from WW II has allowed our Merchant Marine to shrink to the point that it carries less than 1% of America's import and export cargoes. U.S. commercial shipping and ship building continues to exist only because of the "Jones Act" fleets the tug and tow, supply vessel, ferry etc. traffic carrying cargo and passengers within and among the United States. Even that shipping is now under attack from certain members of Congress. America won't be able to hold to this course if Iran and others in the region continue in their ways. More seizures of ships bearing cargoes to or from America will seriously disrupt our commerce. And its not pot luck for Iran et al. No one needs an elaborate intelligence net work today to determine the registry, last port of call, next port of call, and sometimes even the cargo of an ocean transport ship, the information is available commercially.