JUST HOW ISLAMIC WAS THE OBAMA ADMINISTRATION?

BRANCH WAS SOLIDLY IN THE HANDS OF THE MUSLIMS. THE LEGISLATURE IS STILL BEING INFILTRATED. American Admiralty Books Safety & Privacy Policies (Attention EU Visitors , possible "cookie" encounter ahead)

IMAGE:  INVESTIGATIVE PROJECT ON TERRORISM  Link to and Read the Article:

Recently we came across the various statements and observations boldfaced and underlined below. According to one post these had all been checked out and found accurate by SNOPES. We checked Snopes and found that to be untrue, at best SNOPES had labeled the entire collections as "Mostly False". That didn't ring true with us either. Basically we found that Snopes listed quite a group of statements but actually addressed only a few yet dismissed the entire grouping. We decided to check these statements out for ourselves and below we post our evaluations. We invite you to check further on your own. It has been very disappointing of late to discover that some of the Internet verification services are starting to exhibit discernible bias and or/poor forensic practices. We don't intend to go into that business sector but we do recommend caution in accepting internet allegations and supposed verification service findings. We at least, follow basic forensic practice and rules of evidence in evaluating allegations, even if we don't follow standards of forensic presentation (articulating all proofs) in reporting what is, after all, our opinion. We only promise that our opinions are well thought out, in the end,however, they are of course only our opinions. Unfortunately many on the Internet and virtually every source in the national media presents their opinions as facts. Below for your consideration are recent statements made on the Internet and evaluated by such verification services as SNOPES and TRUTHORFICTION as "Mostly false" or   "unproven". Our Findings are described below:


"John Brennan, Obama's head of the CIA converted to Islam while stationed in Saudi Arabia."

Editor's notes: SNOPES and TRUTHORFICTION .COM rate this allegation as "Unproven". However neither service addresses anything but a fraction of the "evidence" offered by proponents of the statement. We like to use the civil law evidence test of "is the allegation more probable than not?". Given the weight of the unaddressed allegations that SNOPES and TRUTHOR FICTION fail to address, given that neither service refutes the allegations with contraindicative facts, but rather offers alternative explanations for the same facts, and absent a denial and offering of contraindicative facts by John Brennan we rate this allegation as tentatively "more probable than not". We would accept "unproven" if a denial were published that addressed all of the allegations. We would rate the allegations "false" if the denial contained sufficient contraindicative facts. At present we rate the probable correctness of this statement as Tentatively More Probable Than Not; if no denial and contraindications are presented before the issue fades from internet forums we'd drop the "Tentatively" from our rating.

"Obama's top advisor, Valerie Jarrett, is a Muslim who was born in Iran where her parents still live. " Jarrett was born in Iran of American Parents. She returned to America with her parents at the age of five years old. As an adult she has made many public statements that have been taken as favoring the Islamification of America, but her actual religious affiliation, if any, is unknown; though in 1977 she apparently publicly professed allegiance to Islam and her intention to help in the Islamification of America (see below) . One parent is deceased and the surviving parent lives in the United States. 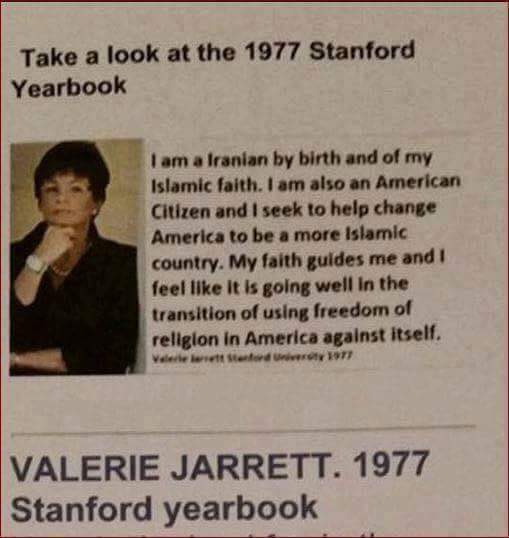 "Obama's Advisory Council on Faith-Based Neighborhood Partnerships, Eboo Patel, is a Muslim. Patel is a well known scholar of comparative religion, if he belongs to any we did not find it in the public records reviewed. He apparently does view Islam as a "religion" vice a "philosophy of global conquest".

"Nancy Pelosi announced during the Obama administration that she would  appoint Rep Andre Carson, D-Ind, as the first Muslim lawmaker on the House of Representatives Permanent Select Committee on Intelligence. It would make Carson the first Muslim to serve on the committee that receives intelligence on the threat of Islamic militants in the Middle East! He has suggested that U.S. schools should be modeled after Islamic madrassas, where education is based on the Quran!!" Basically True, The appointment is correct and widely reported, the statement concerning his gaining access to U.S. intelligence services threat assessments of Islamic terror organizations and individuals is simply logical feature of being on that committee. We have not been able to fully examine his public statements on U.S. schools.

"And last but not least, our closet Muslim himself, Barack Hussein Obama.
It's questionable if Obama ever officially took the oath of office when he was sworn in. He didn't repeat the oath properly to defend our
nation and our Constitution. Later the Democrats claimed he was given the oath again in private. DEBATABLE, REPORTS VARY,


" Congressman, Keith Ellison took his oath on a copy of the Qur'an" NOT EXACTLY, he publicly stated that he would, but new members are not sworn in with their left hand on anything. They are sworn in en mass before the Speaker all raising their right hand. Some bring bibles for post ceremony photo ops. Keith Ellison posed for post swearing in photos (mock swearing in photos) with something other than a bible, possibly a Qur'an or simply a law book, he did want to give the impression that he was sworn in with his left hand on the Qur'an but in fact all new members are sworn in as a group with the left hand empty.

" Congresswoman Michele Bachman was vilified and verbally tarred and feathered by Democrats when she voiced her concern about Muslims taking over our government." TRUE

" Considering all these appointments, it would explain why Obama and his minions were systematically destroying our nation, supporting radical Muslim groups worldwide, opening our southern border, and turning a blind eye to the genocide being perpetrated on Christians all over Africa and the Middle East.. " A NOT ILLOGICAL, BUT CLEARLY ADVERSARIAL STATEMENT. We could find no contraindications, or direct contraindicative statements by the former POTUS addressing the assertion.