LAST CRUISE OF THE IJN NAGATO


THE IMPERIAL JAPANESE NAVY'S NAGATO WAS CONSIDERED THE BATTLESHIP THAT STARTED THE PACIFIC WAR AND USHERED IN THE ATOMIC AGE: 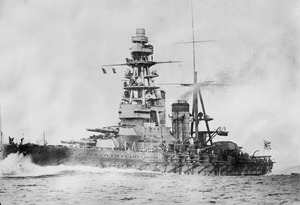 “The Nagato was the biggest battleship ever built. It could stand off and blow anything in the US Navy out of the water. We were scared witless of it, of its sudden appearance in the sea lanes, and we searched unceasingly for it’s whereabouts. The astonishing secret is in here- if you can read it.”
-JCR 11/16/1979
Those were the words my Uncle Jim typed on the cover sheet to the manuscript. He had it wrong, one of the few times I ever knew that to be true. He was thinking of the super battleship Yamato, which with her sister Musashi was one of two behemoths of the world ocean. Yamato was sunk as part of the assault on Okinawa, which our pal Mac Showers remembered well. We were talking about it at the Willow Bar a few years ago about the timing:
“My roommate in the two-story Quonset hut on CINCPAC Hill was an army Captain named Hal Leathers. He did our ground estimates, and he thought there were 100,000 Jap troops waiting for us, and 2000 kamikaze aircraft ready to strike the Fleet. According to the traffic we decrypted, the biggest battleship in the world, IJN Yamato , was getting ready for a one-way mission to beach itself on the island and use its 18-inch guns as static artillery.”

NAGATO 1941 (PD)
“The Japanese were determined to make this so costly for us that we would seek options other than complete victory, right?”
“You have no idea. The civilians on Okinawa, like on Saipan, were indoctrinated to believe that the Americans would kill everyone on the island. Admiral Nimitz sent 1,500 ships, including some Brit fast carriers and a half million men.”
I pursed my lips. “Let me get the timing straight. The invasion started in April of 1945, didn’t it?”
“April Fools Day,” said Mac with a smile. “We found Yamato on the sixth, and sank her the next day. The Japs lost over 107,000 military and civilian on land and 4,000 sailors at sea. It cost us almost seven thousand soldiers and another five thousand sailors to the kamikazes. It was something entirely new in battle, and it was a real problem. The running battle went on almost to the 4th of July…
Uncle Jim was actually talking about a ship called the Nagato, which had a grand history and a role to play once the war was over. She was not the newest battleship in the imperial fleet. Named for Nagato Province at the extreme western tip of the island of Honshu, she was a Dreadnaught-class warship built as the lead ship in her class.
Ordered while the Great War raged in Europe, she was an impressive 780 ft long (LOA) and had a beam of 95 feet. Her armor belt was a foot of steel, and she carried four twin 41 cm guns as her main battery, with a wartime manning of over 1,700 officers and men.
Her operational history had some interesting moments. She carried supplies for the survivors of the Great Kanto Earthquake of 1923, and was dramatically upgraded in the mid-1930s to improve her armor and machinery, and the characteristic pagoda mast was added. She was a participant in the Second Sino-Japanese War (1937) as the world slid into armed chaos, and had one of her two great moments on the 7th of December, 1941.

The NAGATO Rusting at anchor 1946

Nagato was the flagship of Admiral Isoroku Yamamoto, and it was from her Flag Bridge that the order to attack the American Fleet was issued. As such, she is a special part of the history of her nation.
Uncle Jim had been interested in her for something specialized: he was an engineer of the Old School, and was fascinated by technology. A former Naval officer named Edward Smith Gilfillen had passed away, and his widow was interested in getting some of his junk to people who would be interested in it.
Ed had been a member of the Naval Technical Collection team dispatched to Japan at the conclusion of the war.  While at Yokosuka, he had the opportunity to board Nagato as she rode forlornly at anchor in Yokosuka Harbor.
In order to prevent what Uncle Jim called “hanky-panky kamikaze games” Ed disassembled the ship’s big radio, and had kept what Jim described as “18 huge radio tubes and a big variable condenser.” He donated them to the Antique Wireless Association’s Museum in Bloomfield, NY, as unique specimens of WWII-era Japanese technology.
As far as I know, that is where they are to this day. But Ed Gillfillen was going to get to know Nagato a lot better. In fact, he was going to be the XO on Nagato's last cruise. That was the other thing that Jim got- the manuscript of Ed’s account of the most remarkable experience a sailor can have.
More about that tomorrow.