THE HUMBLE HOHLRAUM MAY PROVE THAT LIGHT IS CONVERTIBLE TO MATTER

The 3D printer has a superficial resemblance to the "replicator" of Star Trek fame. This technology is a big departure from most previous forms of manufacture which involved reductive processes and left slag heaps of waste materials. Basically the 3D printer produces 3 dimensional solid objects from powdered materials in an additive process. No material is wasted. Unused powders remain in the printers reservoir and can be used to produce other items. Despite the sense of amazement that the public generally exhibits relative to the 3D printer, it is a "primitive" contraption compared to the idea of the "replicator". As envisioned the replicator constructs solid 3 dimensional objects complete with moving parts from atoms, molecules, subatomic particles, and light simply present in an earth like environment. The leap between the most advanced 3D printers of today and the "replicator" of tomorrow probably crosses, as do so many future technological wonders, an optical physics barrier. Advanced physics theory indicates that matter can be made from light.  When might we see the breakthrough in optical physics based technology that could usher in the replicator? Possibly we are closer than most people imagine. Enter the humble hohlraum.

Hohlraum is a German word for a hollow area or cavity. In radiation thermodynamics it refers to a cavity with walls in radiative equilibrium with the radiant energy within the cavity. Such a theoretical idealized cavity can be approximated by making a small perforation in the wall of a hollow container of any opaque material. The radiation that escapes through the perforation should be a reasonable approximation of the blackbody radiation at the temperature of the interior of the container. Back in 1934 Physicists Gregory Breit and  John A. Wheeler of New York State University published their theory .  Their theory was simply a logical demonstration of Einstein's theory of relativity, which states that the mass of an object is also a measure of stored energy. Thus if one could make two photons collide, the collision should produce two positron electron pairs, which would literally convert light into matter. This theory was known as the Breit-Wheeler Process and for a long time in the period before the first particle collider it remained just a theory. 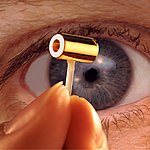 Hohlraum
The cylindrical hohlraum at the National Ignition Facility.
Recently (December  2016) Theoretical physicists at Imperial College London accidentally came across a method that should demonstrate the Breit-Wheeler Process.  The Imperial College physicists published a study in the January 2017 issue of Nature Photonics that describes how, while researching issues in fusion energy, they realized that by firing high -energy lasers into a tiny gold lined hohlraum they created a photon-photon collider that absorbs laser radiation and symmetrically re-radiates it as X-rays, spinning off detectable matter particles off of the high -energy photons.

In the above described study, the team describes how, while researching problems related to fusion energy, they realized that by firing high-energy lasers into a tiny gold lined hohlraum that absorbs laser radiation and symmetrically re-radiates it as x-rays—scientists could create a "photon-photon collider." Such a collider would spin matter particles off of high-energy photons. According to Physics publications that we have been monitoring this demonstration of theory could occur within the year or early next year.

If successful the demonstration of the Breit-Wheeler process wouldn't be the first time that the ability of light to be converted into matter was practically demonstrated. In 1997 Stanford's ,linear collider used a different process that required a large quantity of photons interacting under the influence of a high powered electron beam and electric field. The beam and field provided the energy required to collide the photons and produce matter particles.  The Imperial College experiment using a Hohlraum simply uses the energy of two colliding photons, if successful and it doubtlessly will be, this experiment will mark the first time light has been converted into matter in a total vacuum,making the results much more observable. Moreover, this experiment uses the Hohlraum, which doubtlessly will be a component in future "replicators".

The Hohlraum experiment should be completed within a year, the main hurdle to be overcome is arranging the use of one of only ten labs that contain the needed equipment. The experiment will involve both short-pulse laser capabilities and most probably a hohlraum or hohlraum like device to generate a large quantity of x-rays. Don't expect work on the replicator to start immediately after the experiment. This is science biz. The experimental results will undergo a formal peer review which will consider the results ultimate importance to science. In terms of science divorced from practical applications it should pass muster. Successfully conducted the experiment proves vital aspects of theory crucial to understanding gamma ray bursts and the Big Bang, the first few minutes of the formation of the universe.

Application of the proven aspects of optical physics that could result in the "replicator" will be years, probably decades if not many decades due to the way finances follow in science. Remember that TV signals were sent and received in the lab in the 1920s but the first commercial broadcasts didn't materialize until the 1950s. But the "replicator" will evolve. Modern technology makes it possible to conduct at will the Breit -Wheeler process for the first time. But there must be parallel and complementary developments to make a replicator. One of those developments is the continuing increase in the powers of the laser. As lasers become more powerful we will be able to produce more and different particles than just the positron-electron pairs expected in this experiment. It is starting to look like the replicator is something of an inevitable scientific advance.  A number of science commentators view the pending experiment as ultimately an inevitable scientific advance.

Inevitable or not, the road from 3D printer to the "replicator" via the Hohlraum is not going to be short or direct.  Transformational technologies require massive funding to go from proof of concept to perfection. Such massive funding usually doesn't appear until a real need for the transformational technology appears such as a military need, or the research and development has progressed at a glacial but steady pace that investors can see the technology as "on the verge" of marketability. The technology also has to show the potential of overwhelming the resistance in the market. Transformational technologies are usually disruptive to prior technologies, somebody's ox gets gored. Those oxs have a tendency to go down fighting. But transformational technologies keep coming often creeping up on the market at a glacial pace then rushing in and taking  the territory. How long to the replicator? At the soonest about as long as the first appearance of the "flip phone" "communicator" on the original Star Trek and the first cell phone sales, roughly 20 years for that one. Go ahead and buy that 3 D printer, you've got time to wear it out or amortize it before the next big thing arrives. What comes after the "replicator"....with the "replicator" you're talking making matter from light...now you're way beyond my pay grade