WILL WE RETURN TO SPACE CRAFT RECOVERY AT SEA?

NO MORE WINGS IN SPACE ? 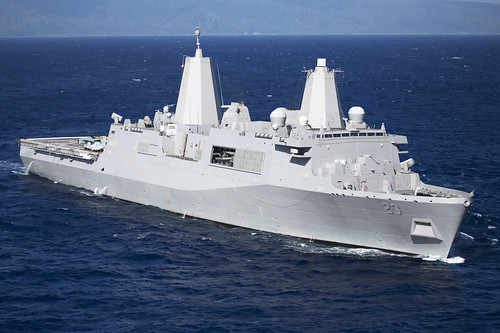 
SAN ANTONIO class  U.S. Navy amphibious transport dock ships look to become the space craft recovery system of the near future hoped for return to U.S. manned space flight. The USS ANCHORAGE ( LPD-23) recently recovered a mock up capsule. The exercise was to test the diving crew's and ship's systems ability to handle the job. The mock up was designed to simulate accurately the shape, size, weight, and center of gravity of the ORION crew module. The ORION is the crew module NASA intends to use for future "deep space" ( well, at least  beyond Earth Orbit maybe as far as Mars). All indications are that tests are going well and the Navy is on track to enter the space craft recovery game once again.

The ANCHORAGE is just one of the San Antonio class Amphibs that NASA anticipates using for crew recovery when US manned space flight is resumed. The Orion is designed to carry up to six crew members  into outer space.  Nearly 45 years have passed since the US Navy recovered the Apollo 17 capsule in the Pacific. Navy equipment has changed quite a bit from that used in space craft recovery in the 60s and 70s . In those days Navy divers and helicopters plucked both crewmen and flight capsules from the water and transported them to near by air craft carriers. The Orion will be larger and heavier than any thing previously attempted. helicopters may be of utility in getting divers to the scene fast, but the heavy lift capabilities of the SAN ANTONIO class amphibious transport dock ships will be needed to recover the Orion from the water.  The ships were of course not originally purpose designed for space craft recovery but their equipment, meant for amphibious warfare, appears to be well suited to the task saving NASA billions in either developing a propitiatory recovery system or developing a more expensive winged vehicle capable of landing as the space shuttle did. Such a winged vehicle would add weight and additional systems to the basic space crew transport function and possibly require an extra powerful launch missile as yet not in the US inventory.  The return of the US Navy to space vehicle recovery tasking  using efficiently war ships designed and available for warfare purposes seems an astute use of tax payer monies. We like the idea.

Here is a link to a NASA fact sheet on the ORION Recovery Operations to date. Things appear to be as they used to say in the 60s "A-OK".