Islam vs Islamists, Introduction To Islamofascists vs "Moderates" vs "Reformed"


IT MAY NOT SEEM MARITIME OR NAVAL IN CHARACTER BUT ISLAMIC UNREST NOW DRIVES MORE THAN 1/3 OF OUR AIRCRAFT CARRIER DEPLOYMENTS.
American Admiralty Books Safety & Privacy Policies

Dome of the Rock (PD) 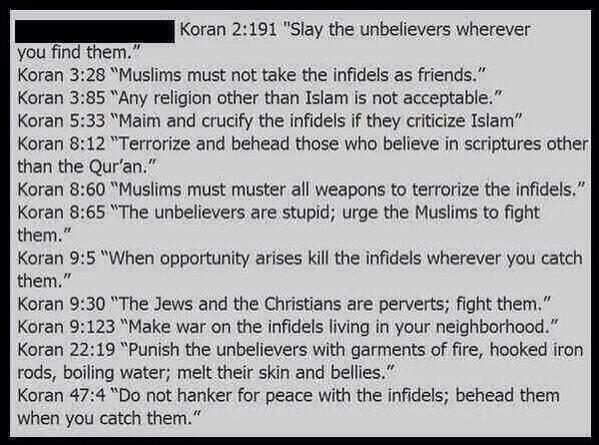 These quotes, directly from the Koran so often used by the Wahabis presently driving Islamofascism among Sunni and Shiite Muslims have been rejected by certain Muslim groups who do not find them binding on modern Muslims. The price these "Reformed Muslims" pay for their belief is constant harassment by the Wahabis influenced islamofascists. Some writers have attached the term "moderate"  to elements within the Wahabis influenced Sunni and Shiite Muslims who at least don't openly engage in violence. Some say that a "militant Muslim is one who cuts your head off, a moderate is one who cheers him on."  Don't mistake a "Reformed Muslim" for these so called "Moderates". What the major media reports as "moderates" are those who are vectoring 1/8 of the so called charitable donations through their mosques to the support of terrorist organizations such as Hamas. Any one of them is unlikely to kill you, but most are quite willing to surreptitiously contribute to the expenses of killing you.  By contrast the "Reformed Muslims" mostly from the Sufi and Alwrite sects see stoning, beheading, amputation as coming from decisions by Imams at the request of Caliphates, Sheiks, and other despotic rulers and not binding on Muslims living in Western democracies, or for that matter any democracies that might be established one day in the Middle East. The Muslims we call "Reformed" ( not a term used by Muslims of any sect) also reject the above verses of the Koran as not binding on modern Muslims living in nations where Muslims are not persecuted. These Muslim do not believe they have any obligation to impose the Sharia on the larger societies they live in , and indeed do not see every part of the Sharia as binding on modern Muslims particularly the mistreatment and suppression of women.


The "Reformed Muslims" as we refer to them are not the "mainstream" in America, Canada, Britain, Germany, and the Netherlands. Within Islam they are persecuted. This presents a challenge to the governments now confronted by the present push for Sharia. The so called moderates who in fact support terrorism hide behind an authentic image that belongs only to this persecuted minority that we collectively refer to as the "Reformed". Western Governments are going to have to learn the differences between the "Reformed" from the so called "moderates" who are actually the financiers of violent Jihad. Below is a video produced originally for PBS that will introduce you to the groups we call "Reformed" and give you a shocking look at the so called mainstream. The video was rejected for broadcast by PBS as not in keeping with the liberal view of "Moderate" Muslims. Western Governments are now being confronted with the problem of not only suppressing Muslim violence on the larger national community but Moderate suppression of the Reformed. It is very difficult for a "moderate" to convert to another religion given the Wahhabis demand for death for apostasy.  The "Reformed" mosques may be the most important escape routes for those who find themselves among the Wahabis influenced "mainstream" Shiite, and Sunni mosques of America and the West. Western governments have to learn how to suppress Islamofascism while protecting the "Reformed" . The Video we link you to below will give you insight into both how immoderate the so called "moderates" are , and how persecuted by the moderates the "Reformed" are.  Again "moderate"/"reformed" are not Islamic terms but they are useful for non Muslim thinkers in understanding the dire situation we are now in with the infusion of Islam into western states.

Again terms like "reformed" and "moderate" are not of Islamic origin. The people and organizations we refer to as "reformed" would probably reject the label noting that their teachings have been handed down through ages. But the concept is useful to the Westerner in understanding what is going on. The "Reformed" should also not be confused with those we have previously identified as "Nominals" who are basically agnostic but seeking to avoid the charge of apostasy by avoiding clear denunciation or statements of non belief ,but otherwise leading secular lives.  American Admiralty Books Safety & Privacy Policies