ARGUMENT: The South China Sea Could Become a Dangerous Contest of Military Might Here’s How the United States Can Prevent That. 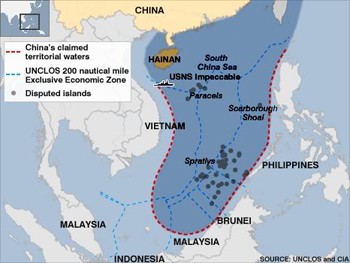 American Admiralty Books Safety & Privacy Policies
The famous 9 dash line that China claims encloses the south China Sea as the private property of Beijing first appeared in 2008 according to an article in Foreign Policy Magazine which appeared June 5, 2015 by Howard W. French. Here is a link to the article:
http://foreignpolicy.com/2015/06/05/south-china-sea-dangerous-contest-military-united-states-navy/
Be forewarned that if you don't have a subscription you may not be able to read it.
Howard French writes for the Foreign Policy Magazine which is a subscription publication on the Internet. We link it for you above. You may be able to read this single article without a subscription if you use our link to copy down the URL and then link to it on your own. They frequently allow one time reviews of articles of special interest.  We have a few selected quotes below.

"The United States became a global power in two steps. First, it achieved supremacy in its own hemisphere. And second, beginning with the end of the 19th century Spanish-American War, by projecting its strength overseas via a navy that could dominate either of the world’s two largest oceans — by setting out at its leisure from either the east or the west coast (plus the notable additions of Alaska, Hawaii, and Guam).
China, by contrast, is surrounded by historically troublesome, terrestrial neighbors, and its one coastline, in the East, is bottled up North to South by a long string of countries from the Korean Peninsula to Indonesia, which it refers to as the “first island chain.” Moreover, since World War II, the United States has maintained military alliances with many of the key nations off China’s coast, most notably Japan and the Philippines. For over seven decades now, American bases throughout the region have helped make the U.S. Navy the preeminent force in the seas off China." From the June 5,2015 article by Howard French in American Admiralty Books Safety & Privacy Policies   Foreign Policy Magazine
"At bottom, the unfolding dispute between Beijing and Washington is about two tightly intertwined issues that will go further than most realize in determining the future of the international order. The first is how major powers should interpret maritime law — and China and the United States take radically different positions on this, befitting their very different geographic circumstances." From the June 5,2015 article by Howard French in American Admiralty Books Safety & Privacy Policies  Foreign Policy Magazine
We have been warning that the China Seas (East and South) have the potential for starting WWIII. The quote above is spot on, the world must decide how the international law of the sea is to be determined. The present international law  of the sea convention is weakened by the lack of U.S. ratification yet we find ourselves constantly arguing that various provisions of  the United Nations Law Of The Sea Convention (UNCLOS) should be applied in this and that controversy. We go right down the line in arguing for application of certain convention provisions in the island disputes of the South China Sea. Yet we have not ratified this convention.

We should first ratify the convention taking specific exception to as few of the provisions as possible. We have not yet  ratified it though it codified many U.S. / British long held positions as codified international law. There were some provisions that appear to somewhat restrict our naval movements  under certain circumstances , but even our U.S. naval leadership  more recently have taken a position in favor of adoption of the convention. If UNCLOS becomes more widely adopted it takes on the power of codified international law and makes China's views of a closed sea much more difficult to legally defend.

China is acting like a thug state in all of this, but simultaneously and selectively is entering international legal forums  attempting to sell their idea of a closed sea. The United States already urges sympathetic states in the Western Pacific to take their cases against China to the Law of the Sea tribunal, like the Philippines has done.  But we have not done anything to underpin the present consensus in maritime international law, a consensus that bodes well for the Philippines and Vietnam, and our commerce moving through the area.  The article cited in this post notes; " If China continues to build artificial islands and equip them militarily, it may be necessary to steam into waters claimed by Beijing on dubious grounds." Fortunately as we published yesterday, (June 17, 2015) the Chinese have recently ceased building artificial islands in the region as a sort of olive branch  to neighboring states, but they continue to fortify and militarize the existing 2,000 plus acres they have already built. Calling China out legally allows a range of smaller countries to take a stand and shipping interests including the U.S., to stand on a rules-based international order  rather than managing the situation solely as a dangerous contest of military might. We appreciated the appearance of Mr.French's article since we are not only largely in agreement but have in fact been advocating the same thing for nearly three years in these pages. Nice that a conventional media outlet is publishing along the same lines on the issue.
American Admiralty Books Safety & Privacy Policies