ISIS PLANED TO CREATE A "SEA OF CHAOS" 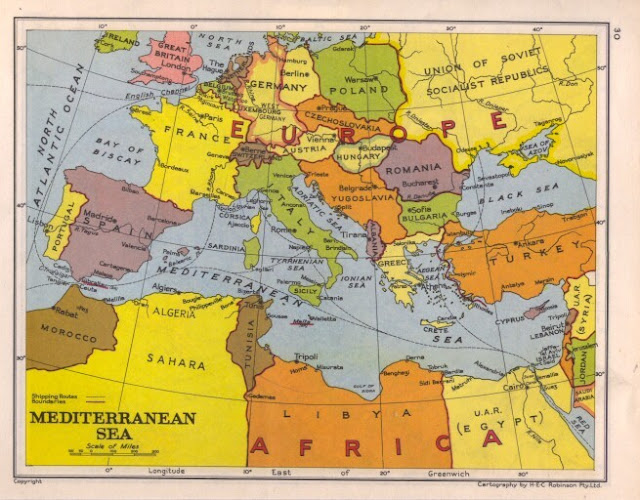 ISIS threatens to send 500,000 migrants to Europe as a 'psychological weapon' in chilling echo of Gaddafi's prophecy that the Mediterranean 'will become a sea of chaos'

EDITORIAL UP DATE 4/27/2017: Since this was written the Western governments failed to heed the warnings and the Muslims have indeed over run Europe and Islamic terrorism has broken out in spots across the United States. Now, "Nationalists canidates" for public office have been elected in the United States, and are experiencing increasing public support in Western Europe. Demonstrations and even native counter attacks on Muslims have occurred in some European nations. As we first noted in this post " Preemptive killing is often a sign of a frightened disarmed population.  The non Muslim populations of the West have every reason to be frightened, so do the Muslims residing among them. What we see now is either the possibility of hope, in that Western nations besieged by the forces of the Caliphate might finally respond with law enforcement and police forces; or the end of hope and the start of the blood letting if governments fail to act. Critical mass is here now.  If France and the Netherlands put nationalists in office, if Great Britain follows suit there could be a peaceful ending. There will be mass deportations of Muslims, but little slaughter.  Are the "suicidaly altruistic" attitudes of Western governments about to change, or is the blood letting about to start. Ask us again after the French election.

OUR ANALYSIS
5/12/2015: We've now had months to witness the related events unfold. ISIS once again told the suicidaly  altruistic Western World of its exact intentions, none of the leftist leaders in charge in the West paid any attention. For months we've observed hundreds of thousands of refugees crossing the Mediterranean bound for Europe. Men of military age are coming in overwhelming numbers along with legitimate families  with children fleeing a dastardly enemy. The military age men already account for a dramatic crime increase in Europe including an increase in maritime cargo crime. The ISIS agents among the refugees have already instigated riots.  As the mass murders in Paris proved, while the typical European native citizen can not own a firearm for self protection, this mass of military age Muslim males seem to have no problem arming themselves, though they arrive on Southern European shores unarmed. We've seen enough to be of the opinion that once again ISIS has won, using the West's naivete and altruism, and humanistic values against the West itself.

Here in the United States the Obama maladministration has accepted thousands of  Muslim "refugees" and at the time of this writing, only one Christian.   We are well aware that ISIS kills more Muslims than any other group if they judge a Muslim as insufficiently "Islamic" for their particular tastes, but male Christians and Jews are slaughtered upon capture and their wives and daughters are pressed into sex slavery or raped and slaughtered. Meanwhile the boat loads of Muslims keep coming in, the proportion of Islamic warriors to legitimate refugees continues as before and the leaders of the West continue to not deal with the reality. European populations are ready to take to arms if it was legal, there being no protection coming from their government. In America , after the recent mass shooting of civilians by a pair of Muslim terrorists in California "open carry protests" featuring armed Americans in accordance with their constitutional rights are beginning to appear. How long before the people of Western nations simply ignore their treasonous governments and begin to address the situation themselves? What chance would a Muslim population amounting to less than 9% of the population in Europe, and less than 1% of the population in the United States, have if the majority decide that their governments have left them with no choice but open warfare on the "Aggressor", rapidly being seen as all of Islam?

The leftist  governments of the West must start to humanely but firmly suppress the Islamification movements, deport the real trouble makers, and make it clear to "immigrants" that the choice is assimilate or go back to the hell hole they fled and try to improve things there. The alternative to humane but firm government action is starting to look like a mob led holocaust of Muslims on Western soil.  Even the majority population that may eventually use arms to eliminate Islamification doesn't want such a holocaust. The people are not mass murders, but once resistance to the crime and cultural assault that governments are not fighting degenerates into armed conflict; there is no command structure to such a resistance, things get out of hand. To the idiots on both sides of the Atlantic that think gun control, mainly disarming the citizens is the answer we would urge you to take a serious look at history. Once populations let loose on each other the weapon of choice is whatever is at hand.

Africa in recent decades has seen massive blood letting where the weapon of choice was the cane knife or machete, normally thought of as an agricultural implement. France was quickly disarmed by the Nazi Germans during the WWII invasion. The French resistance quickly started manufacturing guns with  tools that can be found in any bicycle shop. Called "the gun to get a gun" these simple single shot weapons were quickly turned on isolated armed Nazi occupiers and the first resistance arsenal was "cannibalized" enemy guns. Once the French Resistance showed its fight the allies quickly helped arm it effectively. Muslim terrorists are finding all the sophisticated weapons they need to kill Westerners, do the leftist leaders of the West really think that their native populations are too stupid to get around the laws that disarm them if they feel desperate enough? Do the members of the Obama maladministration and the U.S. mass media have any idea that one of the reasons Americans aren't as panicked as many Europeans are becoming is the confidence that they have in their personal arms, if the government doesn't wake up and put a stop to the spread of Sharia ? Actually an armed civil population is a calm population, witness Israel and Switzerland.  Our analysis is simply this. In the next year either Western governments will take effective action to stop aggressive islamification, and eliminate, not contain ISIS; or things are going to get really ugly in the West. The United States may have a little more time but not if the federal government continues to campaign to disarm the American people. Most Western people feel that if they can effectively defend themselves they have no need for a first strike. Preemptive killing is often a sign of a frightened disarmed population.  The non Muslim populations of the West have every reason to be frightened, so do the Muslims residing among them.

Posted by American Admiralty Books at 9:17 AM