South China Sea: Who Occupies, And Who Owns What in the Spratlys?

China, a nation we generally refer to as "the Dragon" claims virtually the entire South and East China Seas as the nation's "territorial waters". Even if there were some history beyond the fertile imaginations of the Dragon's legal advocates, that idea is beyond any chance of international legal acceptance today. The whole concept violates the internationally recognized sovereign waters and exclusive economic zones of a number of states in the region. The concept is far outside the descriptions of "graduated soverignity" outlined in UNCLOS ( The United Nations Convention On The Law Of The SEA), a treaty to which China is signatory. If nothing else The Dragon's position on the the South and East China seas demonstrates that China is not yet ready to accept full membership in the community of nations, being unwilling to accept the communally accepted rules of well established, observed , and even codified international law when it is inconvenient to do so. Nothing says "thug state" like blatant violation of legal precepts that the thug state has signed off on, it kind of shouts "might makes right". 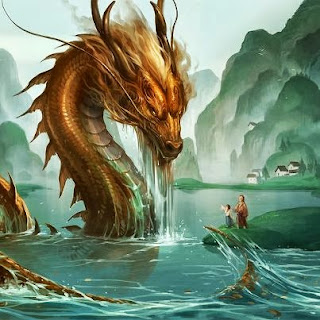 For a great general backgrounder on sea dragons

In accepted modern international law soverignity is not recognized over sea areas beyond 12 miles from the adjacent coastal state's "base line" which, over simplifying, coincides roughly with that state's shore line. Areas inside the "12 mile limit" may be considered "territorial waters" or at sea, "The Territorial Sea". However, even that 12 mile zone of soverignity may be diminished by enumerated circumstances spelled out in the United Nations Law of the Sea Convention (UNCLOS) . Where less than 12 miles of open sea separates nations, the allotted territorial sea is much smaller. The one instance where the usual 12 miles may be extended is in the case of a nation whose adjacent offshore area contains many islands that are part of the adjacent coastal state's sovereign territory.

In addition to actual territorial seas where the adjacent coastal state is completely sovereign virtually as if on land, coastal states may also hold extended particular rights out to about 200 miles from their "base line" which do not interfere with the rights of free innocent passage of the ships of all nations in "international waters". Such rights are generally described in the Outer Continental Shelf Treaty, and the UNCLOS concept of the "Exclusive Economic Zone". Under these precepts of international maritime law adjacent coastal states may be granted the exclusive rights to manage and extract "benthic fisheries", species which spend their lives in contact with the bottom such as flounder, and lobster. Such adjacent coastal states may have the exclusive right to mine minerals and establish structures or semi permanently moored vessels to exploit bottom resources subject to international requirements for the lighting and marking of obstructions to navigation. Once such special rights areas are established and recognized the naval and law enforcement vessels of the states with the special rights may exercise the right of close approach relative to foreign vessels transiting the special zones to assure that they are on innocent passage.  When a vessel is suspected of violating the special rights of the relevant coastal state their naval and law enforcement vessels may stop and board foreign vessels on the "high seas" within these special zones subject to having to pay damages if their stop for what might be termed "probable cause", doesn't prove an actual violation occurred.

China makes the utterly ridiculous claim that virtually all of the South and East China Seas are the territorial sea of China, almost to the beaches of the Philippines. Unfortunately most of China's legal arguments are based on doubtful history , and history itself is often irrelevant in such claims before modern international tribunals. Uninhabited islands like all modern territory no longer may be taken permanently by conquest. The strongest argument for soverignity over islands is "effective settlement", and in the case of the truly uninhabitable islands "effective administration". This is why the Dragon is busy building light houses, air fields, fishing support centers, and even encouraging tourism to parts of the Spratlys which are basically uninhabitable except at great expense and herculean effort. Though these islands are often as much as 800 miles from any part of the Chinese mainland, and sometimes within 24 miles or less of a neighbor state like Vietnam, the Chinese want them in order to extend their exclusive economic zone over the China Seas in order to gain exclusive or near exclusive rights to the oil and rich fisheries of the region. Their onslaught of high tech, high expense occupation is negatively impacted by some islands within the Spratlys that in fact have long been inhabited by nationals of Vietnam, the Philippines, and others. To learn more details about the international legal concepts of soverignity and the exclusive economic zones check out THE AMERICAN ADMIRALTY BUREAU'S GUIDE TO THE ENDURING PRINCIPALS OF MARITIME INTERNATIONAL LAW in our Authoritative Literature Section: Extension

China and the other nations in contest with China over soverignity in the Spratly Islands all actually hold some manned "out posts" ( Vietnam objects to the classification of one of its' light houses as an "outpost", noting that it is civilian manned and unarmed. So far China has not answered the international court's summons on behalf of the Philippines to engage in a legal contest over certain areas claimed by the Philippines. However, the truth is, that if there is ever to be a peaceful legal settlement on the issue the first step is legally determining soverignity over the manned "outposts" by the various contesting states. This pretty much automatically means the Dragon doesn't get the whole region. So the Dragon being a thug state avoids litigation.

Vietnam presently  occupies 21 "features" in the Spratly chain,  the most recent taken a few days after an exchange of gunfire and loss of Vietnamese sailors on March 14, 1988 with China at Johnson South Reef (near the more famous "Mischief Reef"often considered one region) . (Video: https://www.youtube.com/watch?v=Uy2ZrFphSmc) A full list of these features with their names and coordinates was publicized in the April 22, 1988 issue of Nhan Dan, an official Vietnamese government publication. The features are:

The Philippines presently holds the following 9 features in the Spratly Chain:

Taiwan holds only one feature in the Spratly Islands but it is the single largest land feature:
Itu Aba Island

Malaysia
The number of Malaysian-held features in the Spratlys varies based on the definition of "occupation" as is somewhat the case with the Philippines. Let's stick for the time being with troop occupied featured of wich there are five listed below. Two others not listed are civilian occupied.

Only occupies six features but nearly all had to be constructed and continue to be maintained at great expense. Nearly all have no real previous history of Chinese occupation, or even human habitation.
So of the hundreds of tiny islands, exposed rocks, and occasionally exposed reefs about 43 are either occupied or regularly visited by nationals of 4 nations and a fifth nation claims "effective administration over two small submerged areas.  Title to these areas is the first real legal task that must be undertaken to redraw any of the UNCLOS exclusive economic zone lines. But the Dragon won't come to court and would rather build light houses where none are needed and bully its neighbors using its "coast guard" which is at least better than the simple expedient of shooting to death Vietnam's unarmed sailors as China did when seizing Mischief Reef in 1989.

For another, perhaps even more detailed look at this issue we suggest THE DIPLOMAT, an article by Alexander L. Vuving titled


South China Sea: Who Occupies What in the Spratlys?