RUSSIA PROVIDING "BLACK HOLE" SUBMARINES TO VIETNAM, WHICH IN TURN IS BEEFING UP ITS NAVAL FORCES TO DEFEND THEIR ISLANDS FROM CHINA: 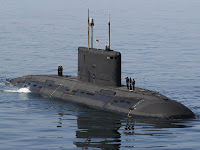 China seems to fail to notice that it has no friends or real allies. They close ranks now and then with Russia but Russia is hardly a friend. Knowing full well that China intends to forcefully occupy the "first island string" all the way to the beaches of Vietnam and the Philippines Russia has chosen to sell high tech submarines to Vietnam which is defending its coastal islands from Chinese aggression. As noted in Defense World recently:

"Russia is expected to deliver the first Varshavyanka class of the six submarines to Vietnam in November, officials announced today.

The Varshavyanka class (Project 636M) of diesel-electric submarines, dubbed by the U.S. Navy as “black holes in the ocean”, has very low noise emission and can hit targets at long distances without being detected by an enemy’s anti-submarine warfare assets.
While the Vietnamese crew has been undergoing training since April, the submarine successfully completed 100-day sea trials in July this year, Admiralty Shipyards officials stated.
Vietnam ordered a fleet of six Russian-made submarines in 2009, seen as an effort to counterbalance China’s expanding maritime influence in the region."

This isn't just a sale of hardware but an outfitting and training program as well. The submarine is the traditional naval weapon of the underdog, a great equalizer against a powerful surface fleet. With this equipment from Russia Vietnam has a fighting chance at making the dragon pay for his folly. One would think that the Dragon would learn, continued aggressive naval behavior will eventually lead to a naval war, with the Dragon suddenly finding itself alone in the world and discovering that the Philippines, Vietnam, and Japan combined are far more formidable than they first appear and far from friendless. Once the shooting starts China can not count on anyone but the insane and ineffective leader of North Korea to come to their aid, and maybe not even him, there is always the possibility that he is not that crazy.
Posted by American Admiralty Books at 11:41 PM