IRAN TO USE NIMITZ MOCK UP AS TRAINING TARGET

BACK ON APRIL 3, 2014 WE BROUGHT YOU THIS STORY. NO ONE WAS SURE WHAT THE MOCK UP CARRIER WAS BEING BUILT FOR THEN. NOW AN IRANIAN NEWS PAPER REPORTS ITS PURPOSE. IF YOU ALREADY READ AND REMEMBER THIS STORY OF THE DISCOVERY OF THE BARGE SIZED MODEL THE UPDATE ON ITS INTENDED PURPOSE MAY BE FOUND BY SIMPLY SCROLLING DOWN:

AN ALERT INDIAN DEFENSE JOURNALISTS BRINGS YOU THIS STORY:

Links checked 2/21/2015
But if all an potential enemy has is smoke and mirrors we suggest that they pay real attention to our Navy's jack:

The ships flying this jack in earnest are not stage props. The same is true for the Indian Navy, so often the target of smoke and mirrors of both Iran and China. Be sure to click on the INDIAN DEFENSE link below for the entire defense journal article. If Iran wasn't so ill intended it would be entertaining to watch.

UPDATE: A TARGET WITH DELUSIONS OF GRANDEUR

An Iranian newspaper has reported that the mock up of an American aircraft carrier that we reported as under construction in an Iranian yard is for use during upcoming planned war games. The Haft-e Sobh Daily quoted Admiral Ali Fadavi, Chief of naval services of the Revolutionary Guards as saying that Iranian forces should target the carrier in trainings, after it is completed"." We should learn about the weaknesses and strengths of our enemy. Our guess is that that scaled up the plans from one of those plastic Revel Model kits to barge size and started building, with no more idea of the Carrier task force's ( carriers don't run about alone) defensive capabilities. We seriously doubt that the model can give Iranian forces any real insight into super carrier defenses, though it might give some unwitting small craft coxswains and aor craft pilots a false sense of confidence as in "we rehearsed this attack a dozens of times. When the first reports of the replica came out Iranian state television reported that was a movie prop. It may well be a movie prop that will eventually be used as a drill target. What the Peacock is doing now is milking it for domestic propaganda value. To the untutored in naval affairs it may well appear that the thing has real training utility relative to actually taking on a U.S. carrier. To those who understand something of how a U.S. carrier task force actually operates it appears that the Peacock again displays its delusions of grandeur. Iran is not yet a prime time player. 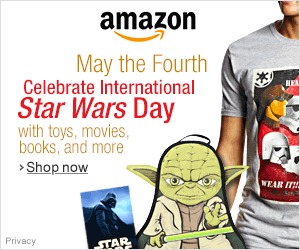 Shop Amazon - Celebrate May the Fourth with Star Wars Items