1/23/2013 Station Identification and Notice Board

NEW DEVELOPMENT IN THE WAR OF WORDS OVER THE DISPUTED ISLANDS OF THE CHINA SEAS.

Chinese Colonel warns Australia to stay out of the coming conflict between China and Japan, expected to be backed by the United States. He appears to be warning of a probable escalation to a nuclear exchange, despite China's announced policy of "no first strike" in nuclear warfare.

BEIJING: A Chinese military officer has raised the spectre of nuclear weapons and warned Australia not to side with the United States and Japan as a territorial dispute in the East China Sea continues to escalate.

America is the global tiger and Japan is Asia's wolf, and both are now madly biting China.
Colonel Liu Mingfu

Senior Colonel Liu Mingfu, of the National Defence University, blamed America’s ‘‘orchestration’’ and Japan’s ‘‘militarism’’ for rising tensions over disputed islands known as the Senkaku in Japan and the Diaoyu in China.

The Philippines plans to challenge China’s maritime claims before a United Nations-endorsed tribunal, a move that may raise tensions as the two nations vie for oil, gas and fish resources in contested waters.
“The Philippines has exhausted almost all political and diplomatic avenues for a peaceful negotiated settlement of its maritime dispute with China,” Foreign Affairs Secretary Albert del Rosario told reporters in Manila yesterday. “To this day, a solution is elusive. We hope the arbitral proceedings shall bring this dispute to a durable solution.”
The Philippines is challenging China’s “nine-dash” map of the sea, first published in 1947, that extends hundreds of miles south from China’s Hainan Island to the equatorial waters off the coast of Borneo. China claims “indisputable sovereignty” over more than 100 small islands, atolls and reefs that form the Paracel and Spratly Islands.
http://www.bloomberg.com/news/2013-01-22/philippines-brings-maritime-dispute-with-china-to-un-tribunal.html----------------------------------------------------------------------------

NEW IN THE BLOG POSTS TODAY:

LATEST MEDIA COVERAGE INDICATES WEATHER MAY BE CLOSING IN AND LIMITING OPTIONS AND ENDANGERING THE SALVAGE EFFORT. THE SHIP MAY HAVE IGNORED RADIO WARNING FROM PHILIPPINE MARINE SANCTUARY RANGERS. AREA CHARTS MAY HAVE CONTAINED AN EIGHT NAUTICAL MILE ERROR ON THE REEF'S LOCATION. SCROLL BELOW THE STATION ID FOR OUR PAST AND LATEST COVERAGE. 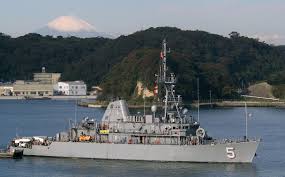 The mine counter measures ship accidentally grounded Friday morning. We have been following the story of this U.S. Navy Warship since Friday. We are only now starting to see any mention in the American general media. So once again we are doing the best we can to follow this story closely for you. There has also been some coverage on gCaptain, an internet maritime news service that you can find a link to in our NEWS Section and some very sparse news releases from official Navy sources. If you did not follow this story with us over the week end you may read all of the coverage by simply scrolling down . There postings below the station identification and notice boards of Friday, Saturday, and Sunday as well as  Monday and Tuesday. There are also updates on the Notice boards themselves . As of our last news in the late afternoon of Tuesday  the ship was still grounded on the coral, with some hull breaches but with flooding under control. However there is concern that worsening weather is coming in the next few days. This is a story likely to continue for some time. One apparent factor in the accident is that the well known marine sanctuary is depicted on certain navigation charts with an eight mile error in location. As professional mariners we are aware that many pacific charts from all sources have errors, some still rely on geophysical data gathered  by Captain James Cook in the 1700s. To read more all about just scroll down.  Unfortunately it appears that the ship ignored or misinterpreted warnings from Philippine Marine sanctuary Rangers to steer clear. We posted an opinion piece and a links to news coverage on that development late last night. Just scroll down below the station identification and notice board and past the first blog post. Once you find the first GUARDIAN related post just keep scrolling down through Friday to read all of the coverage if interested.
--------------------------------------------------------------------------------------------------------


YOU CERTAINLY WOULDN'T KNOW IT FROM THE AMERICAN GENERAL MEDIA COVERAGE BUT THE JAPANESE/ CHINESE SENKAKU / DIAUYU  ISLANDS DISPUTE IS CLOSE TO A HAIR TRIGGER AND GETTING CLOSER TO AN EXCHANGE OF GUN FIRE BY THE DAY, IF NOT HOUR. IF YOU WOULD LIKE TO READ MORE ABOUT IT JUST SCROLL DOWN THROUGH THE LAST SEVERAL WEEKS OF COVERAGE AND TODAY'S NEW POST.

Japanese and Chinese jets came into close contact near disputed islands in the East China Sea.


TOKYO — Japan says it may fire warning shots and take other measures to keep foreign aircraft from violating its airspace in the latest verbal blast between Tokyo and Beijing that raises concerns that a dispute over hotly contested islands could spin out of control.
Japanese officials made the comments after Chinese fighters tailed its warplanes near the islands recently. The incident is believed to be the first scrambling of Chinese fighters since the tensions began to rise last spring.
According to Chinese media, a pair of J-10 fighters was scrambled after Japanese F-15s began tailing a Chinese surveillance plane near the disputed islands in the East China Sea. China has complained the surveillance flight did not violate Japanese airspace, and the F-15s were harassing it.
It was the first time the Chinese media has reported fighters being mobilized to respond to Japanese air force activity in the area and comes amid what Japan says is a rapid intensification of Chinese air force activity around the islands, where Japanese and Chinese coast guard ships have squared off for months. Link to full story below:

Amid rising tensions with Japan over disputed islands, Chinese army in a bid to scale up battle readiness has ordered its armed helicopters to shift focus from logistic missions and gear up for combat operations.
The People's Liberation Army (PLA) planned to change the training strategy of its army aviation unit as more and more armed helicopters joined the service, PLA Daily which is the official newspaper of the military quoted an army aviation unit as saying.
The focus of army aviation unit will be shifted from logistics missions to combat ones, from building the capacity for non-war military actions to core military actions, state-run Xinhua news agency quoted the daily as saying.
The unit will work on major missions such as long-distance tasks, large scale offshore operations, attack coordination with other units and large scale airborne operations, it said, adding that the unit will also aim to improve its operation capability based on IT technologies.

http://timesofindia.indiatimes.com/world/china/China-Japan-island-dispute-Beijing-orders-helicopter-units-to-be-combat-ready/articleshow/18100283.cms
Posted by American Admiralty Books at 12:16 AM