THE LION FISH IN FLORIDA, A 13 YEAR OLD STUDENT POINTS OUT THE DANGER 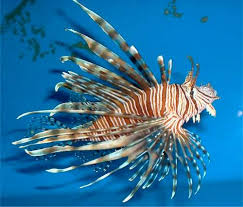 Thirteen year old Lauren Arrington was fishing with her marine biologist father in the fresh water Loxahatchee river in Florida when the pair spotted a lion fish. Lion fish are an exotic intrusive species in the salt water shallows of Florida. The species is prized as an aquarium specimen for its' outlandish looks. It has long elegant but poisonous spines and fins, are an aggressive predator, and present a danger to about 90% of offshore Florida's reef and other species because of spectacular population growth and big appetites. Until the fortuitous sighting by Lauren and her Dad it was not thought that the lion fish could survive in fresh water. Because of the sighting Lauren decided to experiment with the adaptability of the lion fish to reduced salt content for her class science fair. For two weeks she gradually reduced the salt content in the aquarium water containing captive lion fish until it reached 1/6 the percentage of salt in the Atlantic ocean. She stopped at that point because the rules of the science fair would invalidate her entry if her specimens died under experimentation. But the ability of the species to survive in 1/6 the salinity it was originally thought necessary to its survival certainly explained the species presence in the lower reaches of a slow moving river near the sea. But how far inland could the species penetrate?
Interestingly Lauren only placed third in the science competition. Obviously economic or environmental impact of one's entry wasn't a major factor in determining a winner, what did the winning kids do? Discover a cure for cancer?  Professional  Ichthyologists (really serious fish guys) immediately realized the significance of Lauren's work. If they have to, these guys will kill fish in experiments (thank God!) and they have found so far that the pesky and dangerous lion fish can survive down to 1/7  the salinity of the Atlantic. Unfortunately that may not be the limit. Remember the salinity was reduced in the rather compressed time of 2 weeks. Out in the wilds river conditions can fluctuate over much slower or faster times. Low salinity tolerance probably also has considerable variability among individuals within the species. Indeed the species could be adaptable over time to completely fresh water, the Ichthyologist ( really serious fish guys...uh and gals, I guess Lauren is a lot more than a mascot to the profession now) don't really know the specie's limits yet. Given more freshwater tolerant individuals and more adjustment time in nature clearly the fish are a biohazard to the native marine life. As a direct result of the studies started by 13 year old Lauren Arrington, Florida is starting to officially address the problem. The importation of the lion fish is banned, and laws are coming into place to encourage divers and fishermen to take as many of the fish as possible. In these types of situations the intrusive species is hardly ever eradicated but often controlled to the extent that their damage to native life is seriously reduced. The only realistic goal is protection of the native environment. Eradication of invasive species would be preferable.
When possible, human consumption of the invader is the economic factor that can push an invasive species to the brink of eradication. Something like that is starting to happen with some species of carp, and intrusive species in American fresh waters. Not eaten or fished for sport much here, many species are prized in Asia. Commercial fishing for processing and export has begun in some places in mid America. This could be a major step in restoring the native balance. Remember commercialization wiped out the Passenger pigeon, nearly wiped out the Buffalo, created the necessity for Ducks Unlimited. What saved the Buffalo and the native ducks was reduction to non commercial marketability levels before extinction and then the introduction of conservation measures. The reason that commercial fishing probably won't lead to eradication of intrusive species is that once the species is reduced to below commercial market numbers fishing pressure stops , on invasive species with no natural predators in the invaded waters;populations build up again. Our research indicates the lion fish is edible, after poisonous spines are removed (  http://www.safespear.com/v.php?pg=59 .) Its a tough issue for the fish guys and gals, but we all have a stake in it. We feel it is also an illustration of our completely inadequately protected borders. Really; adults, families, terrorist agents, unaccompanied minors, fire ants, kudzu vine, pythons, lion fish, walking catfish, numerous species of carp, Formosan termites, illegal drugs; the list is endless, when do we really regain control over our borders?
Link to original AOL story:
http://www.aol.com/article/2014/07/07/13-year-old-girl-finds-new-info-changing-floridas-ecosystem/20926377/?icid=maing-grid7%7Cmain5%7Cdl26%7Csec1_lnk3%26pLid%3D498097
Link to Lion Fish preparation and recipes: http://lionfish.co/eating-lionfish/
Link to Lion Fish Preparation Video: https://www.youtube.com/watch?v=q3hhe6GsLzU


ON LINE FISHING GEAR    Get out there and hook some invaders

Posted by American Admiralty Books at 12:27 AM