NAVAL IINTERESTS: A LOOK BACK, A LOOK AHEAD

First published 3/22/2013 Naval Interest The Worlds Coast Guards Preventing War or is their New Prominence a Prelude to War. We asked this question months before China announced the formation of the World's largest coast guard. The Dragon Guard's first action out of the box was the first real incident of coast guard forces being used aggressively in a territorial gab, before hostilities were declared. Aggressive Dragon Guard action continues at this writing. On Monday we will be taking another rather lengthy look at the unfolding events in the China Seas and the offshore islands belonging to Japan, the Philippines, and Vietnam. Last week we introduced you to SHATTERED TRIDENT, a novel Larry Larry Bond which gives the reader a fictional view of a naval war breaking out in the China Seas in 2015/16 an occurrence that we view as inevitable if China doesn't back off of her present course. The book came out in May before China rolled out its new consolidated, aggressive, and extremely large Coast Guard. Some analysts viewed this development and a statement or two by China as change of direction. We disagree and see her statements as a feint and her Coast Guard as simply part of a one two punch, making their land grab seem more "legal" and less offensive under international law while they try to bully their way in UN tribunals around UNCLOS (United Nations Convention on the Law of the Seas). Right now we thought would be a good time to revisit our observations on the global growth of coast guards.


THE NEW PROMINENCE OF COAST GUARDS IN THE WORLD.  PREVENTING THE OUTBREAK OF WAR OR PREPARING THE BATTLEGROUND? 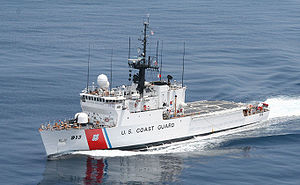 Months ago we brought to you the first stories of the conflict along our own Rio Grande that had reached such proportions that the State of Texas had requested Congress to assure a "Continuing Coast Guard Presence" along the Rio Grande. We have previouly published two stories that describe the conflict, the forces, and the major events in that conflict. What might bear retelling here is why Texas felt that it was so important to bring the U.S.Coast Guard into the conflict. There was more to it than the fact that the Rio Grande is an international water body shared by the United States and Mexico.

The Zeta drug cartel which has been literally inflicting a reign of terror on both sides of the border must be denied access and use of the Rio Grande. The Texas State Guard Marine Battalion and elements of the Texas Rangers, Texas Highway Department, Marine Element, and Texas State Parks Police probably can effectively patrol the river and are doing so. The demand for U.S.Coast Guard forces is not just due to the fact that border control is primarily a federal responsibility and Texas is spending tens of millions defending itself in the Federal vacuum.

The real issue is the long history between Mexico and Texas. Texas
was a breakaway province of Mexico and Mexico didn't respect the border in the early days of the Texas Republic. Later Mexican based outlaws like now, plagued the border regions. Neither the outlaws nor the Texas Rangers paid much attention to the river as a border. The Rangers would regularly continue hot pursuit across the border after the bandits. Sometimes the Rangers would plan and execute cross border raids to deny the bandits safe havens. Now however, due to the abdication of Federal responsibility, Texas state military department members and Texas state law enforcement members are pursuing the same quarry as the Mexican Army is on the other side of the river. Only a few yards of river separate the forces of Texas and the Army of Mexico. If there are any trans-border incursions by either side there is a high probability of firing on each other , especially since the ZETAS evolved out of Mexican Army special forces units and it is widely known that elements of the very army sent in to collect the Zetas is in fact on the take from them. Mexico has begun to rely on its Navy for much of the anti Zeta work. Both Texas and Mexico would like to get the U.S.Coast Guard in between the Mexican Army and the Texas Rangers et al.

So here in the United States we are trying to use our armed Coast Guard as a peace keeper/law enforcer to prevent government on government armed incidents. In the High Arctic Russia is utilizing its Coast Guard like forces to under write claims of "effective administration" over territories it is not entitled to but is litigating before the UN for. The U.S. Coast Guard is again being challenged, and so far is failing, to establish an "effective presence" in the High Arctic while Canada contemplates arming its so far unarmed Coast Guard. Coast Guard forces often armed, carrying naval rank, and empowered with civil and criminal law enforcement duties are often in the public mind most associated with search and rescue.  Coast Guard forces though often quite capable of deadly force when engaged in confrontations with each other or commercial vessels of another nation just seem to remove the war like element that the same activity carried out by regular naval vessels would impart to the public.

Coast Guard forces, however are a two edged sword. They can be valuable in de-conflicting a contested area, but they can also be abused by a thug state to cover an aggressive territorial theft in a veneer of legality. In the Japan/China and Philippines/ China island disputes we see both uses of Coast Guard like forces. China routinely makes incursions into waters legitimately under the sovereignty of the Philippines or Japan via their now coalescing Coast Guard like forces and while the Philippine or Japanese naval forces could easily sink these Chinese intruders both nations routinely respond with Coast Guard forces. These forces have engaged in deliberate "running scrapes" (glancing collisions) and even water cannon fights. At one point Chinese vessels "locked on" to Japanese force elements with target acquisition radar. Had that been an incident between naval vessels the locked on vessel more probably than not would have opened fire.

Posted by American Admiralty Books at 12:12 AM