THE LITTLE KNOWN HISTORY OF AMERICA'S OTHER REVENUE MARINE

IN THE 1860s THE U.S. REVENUE MARINE AND THE OTHER "PREDECESSOR AGENCIES" THAT WOULD EVENTUALLY FORM THE U.S. COAST GUARD WERE STILL EVOLVING EVEN AS THE AMERICAN CIVIL WAR RAGED ON. THE CONFEDERATES WERE EVOLVING A COAST GUARD ALONG ALMOST IDENTICAL LINES.

The United States Coast Guard traces its history to the 1790 formation of the system of 10 "cutters" assigned to the Secretary of the Treasury for the enforcement of U.S. Maritime customs laws. As the Continental Navy had been disbanded and the U.S. Navy had not yet formed these "Cutters" were the only armed vessels owned and operated by the Federal Government of the United States. The crews were organized along naval lines and officers commissioned with naval ranks, and with the Navy in formation in mind, the Congress eventually elected to make the Revenue Marine a naval auxiliary subject to the call of naval duty under the command and direction of the U.S. Navy after it was formed. Eventually the highly disciplined but non military U.S. Light House Service would be inducted into the evolving Coast Guard, as would the para naval organized U.S. Life Saving Service. The U.S. Light House Service was actually created in 1789 one year before the Revenue Marine but the Revenue Marine is considered the "parent agency" vice one of the "predecessor agencies" of the U.S. Coast Guard because it was the agency into which everything else was folded, and was the only military organization in the group and as each "predecessor agency" was at most only "uniformed" or "paramilitary". Upon assimilation into ""Coast Guard" the predecessor agencies personnel and operations either became military members or civilian employees of a military employer, the first "Commandant" of the newly formed and named U.S. Coast Guard was a senior Revenue Marine Officer.

Simultaneous with the creation of the Confederate Revenue Marine the Confederacy also inherited the responsibility for maintenance light houses, buoys, and other coastal aids to navigation. To provide for this navigational function the Confederacy created a Light House Service (Bureau) almost identical to that of the United states at the time. Take a look at who the heads of this service were.

Obviously Raphael Semmes, who would gain fame as the commander of the famous CSS ALABAMA had a very short tenure but his presence on the roster indicates the importance that the Confederate naval establishment placed on the Light House Bureau. 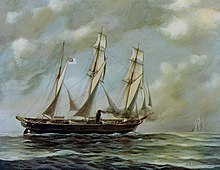 CSS ALABAMA, The Best Known Commerce Raider of the Confederacy

The rapid manner in which the Confederacy created a Revenue Marine and a Light House Bureau lends credence to the recent observation in the U.S. Naval Institute's PROCEEDINGS that if the United States didn't have a Coast Guard it would need to create one right away. For quite different reasons, but responding in large part to the global reputation of coast guard services as arms of effective government administration over watery national areas in peace and war, China has just formed its many different civil maritime agencies into an armed coast guard. Relatively little is known about the Confederate agencies but their parallels with the evolution of what would become the U.S. Coast Guard is illustrative of the needs and agency models that give rise to coast guards separate and distinct but closely cooperative with national navies.