AUSTRALIA, CANADA, GREAT BRITAIN,NEW ZEALAND, BERMUDA, BELIZE, SOUTH AFRICA WHERE ARE YOU?  THE GREAT CATFISH IS TRYING TO COMMUNICATE WITH YOU?

Ahoy non American English speaking bipeds! I've been trying to reach you! You have not been clicking into the blog. My mail apparently isn't reaching you and this hawk got my carrier pigeon.

So I'm sending this out into the world via our faithful readers and asking them to pass it on to every person they may know in a nation where English is an official language. Our most detailed statistics are in and despite my directly addressing all of the English speaking bipeds on matters of utmost communal naval and maritime importance I can't help but notice that we had 64 times more Russian readers than British. Sometimes we go two weeks with no visitors from the English speaking nations other than the United States. It is vital that we chat. So again I'm asking my regular readers to please forward this to everyone you know in the English speaking nations.

WHO AM I, WHY WOULD YOU WANT TO HEAR FROM ME?
I am Namazu, a 3,000 year old giant catfish and former demigod formerly honored in Japan as being responsible for coastal earth quakes and tidal waves or tsunamis. Now, before you go dismissing me as some sort of pagan myth. I'd like you to keep in mind that the American Religious Right accused me of that when I first started employment with the American Admiralty Books  (AAB) organization and its parent group American Admiralty Information Services (AAIS). As I pointed out to them in my defense of the reemployment rights of former demigods,  I in fact, was not responsible for violent earth tremors or tsunamis.  I'm merely a personification of those forces of nature and I didn't get to choose the job title of "demigod".  I am in fact, a monotheist though not formally a Christian.  As I pointed out in my defense of the reemployment rights of former demigods I am after all, a giant catfish, and as such not eligible for baptism; that being reserved for repentant bipeds like your selves. I now count among my regular readers quite a few members of the American Religious Right. After the Japanese outgrew any use for "demigods" I found myself for the first time in 3,000 years of existence unemployed. Like a lot of former celebrities I tried to cash in on my notoriety. I posed as a cover model for new wave rock album:

I made an appearance in my semi human apparition as a performance artist.
You can view it on YouTube at this link:  Namazu Live Performance    I appeared in an animated film, you may view the trailer here Namazu Video Trailer and I modeled for artist Eske Kath here is a sample of his work featuring yours truly: 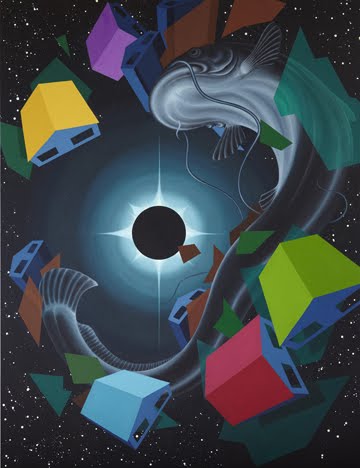 Not that the fine arts were new to me or I new to them as a subject. People had been fascinated with my images for thousands of years as illustrated by this ancient wood print. 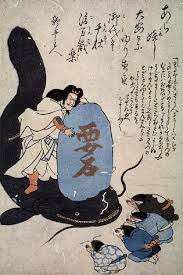 But these occasional gigs weren't really very satisfying after 3,000 years as a demigod. I was depressed for a while then took a deep self assessment. I found that I'm 3,000 years old , now that's experienced.  I live at the bottom of the Sea of Japan, pardon the pun but you've got to credit me with some depth. Really despite the pun, I've been to the heights worshiped as a demigod, to the depths working for a pittance as a model, that's pretty much the full gambit of work/economic experience for an intelligent life form. I really do have depth. I have always lived in the ocean, that makes 3,000 years of maritime specific experience. The other things I have done in my career have given me poise and confidence in my ability to communicate. After due consideration I determined that I should be a writer. So I assumed by fully human persona ( a very old Japanese man, I can not hold it together for very long, if it fails on me I look like my apparition on the album cover, human body , catfish head) and determined to set out seeking employment. Given my back ground I wanted to interview with maritime publishers. Given my appearance and potential for a sudden and uncontrolled change to catfish head mode
I knew I had to find a town that had maritime publishers and wouldn't blink an eye at a catfish headed person. I needed a port town open to strange sights. There was only one place to go:

And that's how I walked into the offices of American Admiralty Books one winter. It turned out it was a good thing that it was winter because the head honcho OG (short for Old Guy) and his wife ("She who would be obeyed") spend summers in Annapolis. I caught him in, we had an interview, there was a meeting of the minds and the rest is history. I'm now a senior maritime analyst and Dean of the Namazu School of Climatology helping the AAB pursue its mission of organizing and making available all of the maritime literature, technical and literary, all of the videos, all of the links to maritime information in the English language available to the entire English speaking world. And yet today, a year into the quest we have more Russians, Poles, Chinese, and French reading us in translation than British readers. I have been addressing "the English speaking bipeds" for over a year now on naval. coast guard, and merchant marine subjects, on national policies for the maritime sector, often speaking directly to Britain, Australia, New Zealand, Belize, Bermuda, the Bahamas, and South Africa. But in fact you haven't been reading my irreplaceable wisdom. I have been trying to tell you the truth about climate change and what should really be done about it. I've described how the English speaking world is being hemmed in by growing naval powers while English speaking naval power is shrinking, and what to do about it. I have described the common sense solution to so many maritime and watery issues, yet you , the non American English speaking world have not been tuned in.

English  is the official international language of maritime transportation. Merchant Marine Officers all over the world are tested for minimum proficiency. Helm and engine orders by pilots to helmsmen across the globe are given in English. It wasn't the Americans who made English the world's standard language for maritime activities. It wasn't the Americans who established naval customs now observed all over the world, indeed the American Navy adopted British naval traditions. But if you are not tuned in they are about to organize it for retrieval without input from anywhere but America.

IS THIS THE ONLY FLAG THAT WILL FLY OVER THE GREAT ON LINE LIBRARY OF THE MARITIME LITERATURE OF THE ENGLISH SPEAKING WORLD?

Join the dialogue today, check in and use the Comment section to tell us what you think. Dare to read, think, and write. Check out :
AMERICAN ADMIRALTY BOOKS and start to plant these flags and others on the grounds of the World's growing on line library of English language maritime literature and information.