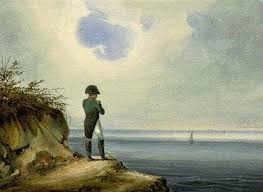 Napoleon was exiled to St. Helena and supposedly he died there on that tiny island at the age of 51 in May of 1821. He was attended by both French and British physicians who, as was the custom of the day, fashioned a number of death masks of the general, or were they the death mask of a patsy double? That's just one of the alternative histories suggested by a variety of facts surrounding Napoleon's exile on St. Helena. At least three of the alternatives involve escape by sea, one by hot air balloon.

At the time of Napoleon's death New Orleans was a considered a tropical and disease ridden wilderness outpost by most upper class Frenchmen. Yet one of those personal physician's of Napoleon went to New Orleans after Napoleon died on St. Helena carrying the death mask with him. For centuries a myth has persisted in New Orleans that a group of conspirators hired famed privateer Jean Lafitte to sail to St. Helena and leave a double in Napoleon's place and smuggle the emperor back to New Orleans where conquests could begin again. This only seems weird if you have never visited New Orleans.

In fact there is a house in the French Quarter on Chartres street called the Napoleon House which is said to have been built by the then mayor of New Orleans to house Napoleon on his deliverance to New Orleans. Atop the house is a copula from which the general anchorage on the Mississippi can still be seen to this day. There they say, the mayor keep look out for the return of Lafitte's ship the RAVEN.


Unfortunately according to the local legend Lafitte did pull off the switch. The poor double expecting to lead a life of ease as the captured emperor was slowly poisoned by his French physicians as part of the plot. But in the end it was all for nothing. Napoleon died at sea.

Well again it seems far fetched except for the physical artifacts strewn about New Orleans like the death mask and the Napoleon house. But then in the 1930s some visiting Yankee anthropologist visited the village of Lafitte and met an elderly woman tending a grave very carefully. They asked her who was buried there and she said that she didn't know but that her father said they were some very important people and she should take real good care of the graves. They asked her if her father had kept any records and she produced a hand written ledger book from which a story emerged in French.

It seems that old lady's grand father was a trusted confederate of Jean and Pierre Lafitte. The first person in the burial plot according to the ledger was Napoleon who had died at sea after the rescue from St. Helena but was preserved and brought to Louisiana for a respectful burial on land in Lafitte's last strong hold. Also interred were both Lafitte Brothers at different times. The graves have never been exhumed.


Of late the legend has been gaining credence as forensic scientist examining the medical notes of the English physicians on St. Helena are starting to ask the question could Napoleon or whoever that was on St. Helena have died of low level arsenic poisoning? Sometimes history is little more than the most widely accepted rumor but double switch/rescue by Lafitte is not the only Napoleon Rescue myth. One has him rescued by an early submarine.

THE PLOT TO RESCUE NAPOLEON BY SUBMARINE


Tom Johnson is one of those shadowy figures that history often sees about the fuzzy edges of naval events. He was born in 1792 to Irish parents and was supporting himself as a smuggler by age 12. Sometimes he was caught and at least twice made good on daring escapes from prison.


When the Napoleonic Wars started he was hired to pilot a pair of covert British naval expeditions, they say despite, but we think because, of his extensive criminal record as a smuggler. Tom Johnson was well schooled in maritime skulduggery. In later life he claimed that in 1820 he was offered the sum of 40,000 pounds the equivalent of $3,000,000 today to rescue Napoleon from St. Helena.


There was no double in this plan, the emperor,s escape would be discovered in relatively short order and the British fleet in hot pursuit. But this plan would have made the emperor's escape vessel invisible to the British naval technology of the day. The plan called for lowering Napoleon down a steep cliff face in a bosun's chair to waiting submarines. According to Johnson he had to design the submarines himself , which made sense since his story takes place decades before the invention of the first practical working submarines. An entire British naval squadron of 11 ships patrolled offshore constantly.

The escape required two submarines due to the defensive tactics that Johnson outlined. The submarine carrying Napoleon would submerge and escape the area if pursued by British forces. The second would submerge and  lay mines, or even engage in surface combat to assure the escape of the emperor carrying submarine.

Is there any support for such a plot ever being discussed with serious Bonapartist or being funded other than Johnson's claim? Charles de Montholon, a French General who accompanied Napoleon into exile mentioned a plot to rescue Napoleon by submarine in his memoirs. The primary source of information on the plot however is a book called Scenes and Stories By A Clergyman In Debt published in 1835 by an author who claimed to have met Johnson in debtor's prison. Montholon reported that a sum that would now be worth about 1 million dollars was expended on the development of a submarine for such an escape. But even Johnson never claimed that the conspiracy was actually carried out.

There were other escape of Napoleon conspiracy accounts about, some involving fast yachts and one involving a hot air balloon. But Napoleon died on St. Helena right? Of all of the stories only one leaves unmistakable artifacts and an explanation of how he could have escaped and the escape not be noticed. His supposed death at sea explains the lack of any subsequent appearance at the head of any armies. The use of a double who had to be disposed of to avoid detection certainly explains what looks like a premature death of the Emperor at 51 with no previous history of chronic health issues. Many people died in those days at quite young ages but generally of infectious disease. Only the Louisiana story is strange enough to be true. We don't know what happened but if you are ever in New Orleans stop and have a drink at the Napoleon House we'll bet the story seems much more plausible once you are sitting there. History, especially maritime history, its often simply the most widely accepted rumor.

Posted by American Admiralty Books at 12:19 AM