IVAN IN SYRIA....A KINDER, MORE GENTLE IMAGE?  CAN IVAN EVER BE A FORCE FOR PEACE? 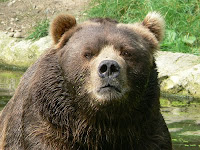 It seems that Russia has announced that it is swapping out its military personnel on its Syrian Naval Support Base for Civilian employees.  Ivan never being one to feel an obligation to provide reasons for doing anything   isn't providing one now. Our analysts suggest that the Bear may be positioning itself to be more of a credible peace broker in Syria. The Bear claims the base is working normally despite the civil war in progress in Syria. Ivan's purpose would appear to be to position itself to keep its only naval base outside its own territory regardless of which side comes out the winner. Bears are smart like that. To read a press account of this recent development click here: http://www.star-telegram.com/2013/06/27/4968303/russia-subs-military-with-civilians.html
Posted by American Admiralty Books at 12:09 AM