GETTING U.S. AND INTERNATIONAL COAST GUARD NEWS ON A DAILY BASIS 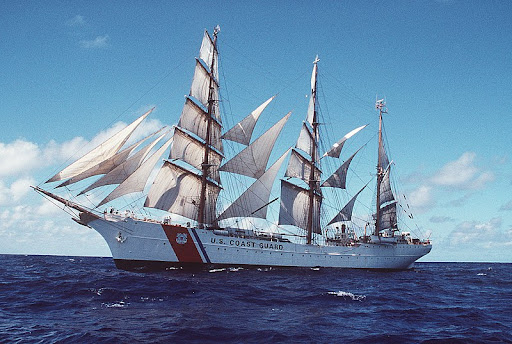 
We have been publishing  a lot of of news and opinion posts on the U.S. and various international coast guards and small navies conducting coast guard like operations of late. A lot of the information that we have been publishing is not readily available in the general electronic or print news media and often not widely covered in the larger maritime trade journals. However as we have so often noted we are not a news agency, we are a general maritime reference, a starting point for research into any maritime subject. Even our "NEWS SERVICE" is really more of a reading room where our visitors can link into the E-versions of the various maritime trade journals and news reporters. We regard it as part of our mission to call your attention to and link you to reliable and authoritative sites on areas of special interest. Due to space limitations we don't have a "Coast Guard" special interest page. Presently our information on coast guards is spread out between our NAVAL INTERESTS section and because the activities of coast guards around the world heavily impact merchant marine operations we carry some information in our MERCHANT MARINE INTERESTS section. Finally most but not all VESSEL TRAFFIC SERVICES are operated by coast guards so we carry significant coast guard information in that section.

Of late, the aggressive use of their new coast guard by China has drawn a lot of attention. We have never before seen a coast guard used as the forefront force in an aggressive territorial acquisition campaign. This "mailed fist in a velvet glove approach" to stealing other people's island territories and with them their exclusive economic zones is unprecedented. Clearly interests in coast guards is rising globally. Until we resolve our space available difficulties, which have to stand in line with a number of other serious technical issues, and create a COAST GUARDS SECTION we are going to have to make our collection of data on Coast Guards redundant in a number of places throughout the site. We will start today with a blog post full of links and descriptions to official and unofficial reliable and authoritative sites. We will then post this same information to our "BIG LINKS LOCKER" and all of the special interest sections where now carry information relevant to coast guards.

THE  OFFICIAL HOME PAGE OF THE U.S. COAST GUARD
http://www.uscg.mil/


USCG NAVIGATION CENTER
http://www.navcen.uscg.gov/
This site is about the global positioning system (GPS) , the Automatic Information System (AIS), Long Range Identification and Tracking, Notice to Mariners and other navigational systems and services operated by the U.S. Coast Guard

This is a reliable and authoritative site operated independently of government sponsorship, we quote below their mission statement:

"This blog will generally not discuss day to day operations that the Coast Guard does so well. Other sources such as Coast Guard Compass are much better positioned to do this than I.

The objective of this blog is to look over the longer term, at budgets, policies, tactics, roles and missions, and their physical expression, the platforms that allow the Coast Guard to do its job. My own interest and experience is primarily with the larger patrol vessels, so they will perhaps receive a disproportionate amount of attention. If so, it is not for lack of respect for the other elements of the Coast Guard, and I hope comments will to some extent make up for my lack of familiarity with these areas.
There will also be some reflection on the history of the service that I hope will be both entertaining and illuminating.
Comments are not only welcome, they are essential to maintaining balance and working toward a better understanding of the needs of the service. Recognizing that readers come from different levels of experience and understanding, please keep comments respectful and on topic and avoid personal attacks.
Additionally this blog is not about partisan politics. There are lots of other blogs that provide a venue for that. Comments which include comments on contemporary politics will be deleted in whole or in part.
I’d like to keep the discussion professional, so personal attacks will also be deleted."

Australian Coast Guards- A Wikipedia article that explains how the many services provided by comprehensive style services such as the U.S. and canadian Coast guards are provided in Australia by a variety of agencies and volunteer organizations.
http://en.wikipedia.org/wiki/Coast_guards_in_Australia

The British Coast Guard is an executive branch agency concerned with search and rescue and certain elements of maritime safety. The British Board of trade deals with Merchant Marine issues, and the Royal Navy has responsibility of coastal defense. The Customs Service handles many aspects of maritime law enforcement. So the British Coast Guard proper is basically a national maritime search and rescue agency. For a good over view of how Great Britain organizes their coast guard services again there is an excellent Wikipedia article:  http://en.wikipedia.org/wiki/Her_Majesty's_Coastguard

Until 2013 the Chinese coast guard functions were spread across a variety of agencies. Certain Ships, boats, air craft and certain personnel of all of these different agencies were transferred into the new military / law enforcement/ search and rescue service now known as the Chinese Coast Guard in 2013. Again Wikipedia has an excellent description of this rapidly changing organizations evolution and present status:
http://en.wikipedia.org/wiki/China_Coast_Guard


FRENCH COAST GUARD: Is called the Gendarmes Maritime and consist of about 1,100 military personnel assigned to maritime police duties and operating as part of the French gendarmerie, a unique branch of the French military having law enforcement authority. The Gendarmes Maritime operate about 42 small patrol craft ranging from open outboard "runabouts" to enclosed patrol vessels that appear to rang up to the 65 to 80 foot range. They patrol the territorial and EEZ waters of France and her overseas departments. They perform provost duties for the French navy, have a naval station physical security role and provide some maritime search and rescue services. The many other traditional coast guard functions as performed by the U.S., Indian, Italian, Japanese, Malaysian and other "comprehensive" coast Guard services remain divided up among a variety of French maritime departments and services. Wikipedia has a comprehensive description in English:  http://en.wikipedia.org/wiki/Maritime_Gendarmerie


GREEK: "HELLENIC COAST GUARD": The Hellenic Coast Guard is a paramilitary maritime police organization and military auxiliary capable of supporting the Hellenic Navy when called on. Its personnel are organized in a naval manner under a naval style rank structure. The service formed in 1919 and operates ships, boats, and a small air service. Wikipedia has an excellent over view at : http://en.wikipedia.org/wiki/Hellenic_Coast_Guard


The Hellenic Coast Guard Website (may be translated when viewed in Google plus, other systems ability to translate unknown) http://www.hcg.gr/

The Italian Coast Guard is called the Corps of Port Captaincies and is a branch of the Italian Navy but administered under the Ministry of Infrastructures and Transport. The Italian Coast Guard is both a military and law enforcement agency with several other civil missions very similar to many of the civil missions of the U.S., Canadian, or Indian Coast Guards, it is a traditional "full service" coast guard. The Official government sites will probably require a translation program but again Wikipedia has an excellent comprehensive introduction in English: .http://en.wikipedia.org/wiki/Corps_of_the_Port_Captaincies_%E2%80%93_Coast_Guard .

JAPAN COAST GUARD:
Japan's Coast Guard was originally called the "Maritime Safety Agency" when it was formed in 1948 and its name was changed to "Coast Guard" in 2000. The organization parallels the U.S. Coast Guard in terms of organization and mission mix. The service is capable of augmenting the Japanese Maritime Defense Force (navy) and operates a mix of ships, boats, stations, and an air service. Its mission mix combines regulatory, law enforcement, marine safety , search and rescue and naval readiness. wikipedia has a good general introduction at: http://en.wikipedia.org/wiki/Japan_Coast_Guard


THE MALAYSIAN COAST GUARD doesn't use the title Coast Guard but is officially titled "The Malaysian Maritime Enforcement Agency (MMEA) Despite the small size of the nation which also operates an impressive small navy the MMEA is impressively sized at over 7,000 uniformed para naval personnel. The service operates ships, boats, rotary wind and fixed aircraft including sea planes. The uniformed members are organized in a system of traditional naval ranks but their duties are more of a maritime police nature plus search and rescue. Wikipedia has an excellent general introduction:
http://en.wikipedia.org/wiki/Malaysian_Maritime_Enforcement_Agency

We also carried a post on this coast guard service:   http://americanadmiraltybooks.blogspot.com/2013/12/the-role-of-small-naval-forces-in.html

THIS SUMMARY AND LINKS COVERS ONLY THOSE "COAST GUARDS" THAT WE HAVE PREVIOUSLY RESEARCHED FOR POSTS. THERE ARE A NUMBER OF OTHER COAST GUARD,S  IN THE WORLD. MANY COASTAL NATIONS DIVIDE THE FUNCTIONS AND HAVE NO DISCERNIBLE "COAST GUARD" OTHERS HAVE MOST COAST GUARD FUNCTIONS ENTRUSTED TO THEIR NAVIES. GENERALLY SEPARATE AND DISTINCT "COAST GUARD APPEAR IN NATIONS THAT HAVE CONSTITUTIONAL CONCERNS ABOUT ENTRUSTING LAW ENFORCEMENT DUTIES TO THEIR MILITARY. WE WILL BE POSTING THIS LIST IN OUR NAVAL INTEREST, MERCHANT MARINE INTERESTS, NEWS AND VESSEL TRAFFIC SECTIONS AND UPDATING PERIODICALLY.