EDITOR'S NOTE:  The weather this winter all over the nation has been awful. Even on the normally balmy U.S. Gulf Coast only extreme South East Louisiana has escaped a few snow flurries and at least two bouts of day time subfreezing temperatures. Even south of New Orleans there have been at least 5 nights at or below freezing. South East Louisiana meteorologists rate December -February (so far) 2013-14 the coldest winter in 20 years. Of course having experienced New England Winters and the far milder winters of Maryland and Northern Virginia I often feel that "winter" should always appear in quotes when discussing the cool season on the Gulf Coast. When I ran across this old post from the Great Catfish recently it hit me that what he described in his famous defense of former demigods is quite true, Back when we attributed unpleasant natural events to demigods we had an actual personality to blame for the unpleasantness. No wonder the Great catfish decided to just get a regular job.-Johnas Presbyter, editor

We former "demigods" are Forces of Nature, we manifest our particular intelligence in the operation of the earth's heat budget. We let out the occasional fissure to allow volcanic heat to escape and we keep the tropics from burning up and the polar regions from being frozen all year. We do these services for Mother Earth through seismic activity, weather fronts and storms.  Today many of you believe that we are nothing more than the sum of our parts. Well, consider the coherent actions and useful results in terms of the Earth's habitability that come from the interaction of our parts?  Do you not see a kind of coherent intelligence there?  Lets take the recent Frankenstorm . We can explain it in terms of a hurricane formed in the Gulf taking a turn to the north east due to steering currents originating from an early and deep cold front coming off the Canadian shield and dipping deep into the Gulf Coast region due to a deep bend in the jet stream. Then as the storm traveled north away from the usual path it became enveloped in the upper part of the same frontal system and evolved into a storm within a storm, a virtual super storm.

OK, now try this explanation.  The Great Bear Nanook (aka high pressure cold front)  pawed the snow cover of the far north and stirred up a giant blizzard about the same time the Cajun giant catfish "Jack" was wiggling up another hurricane down in the Gulf. The Great Sky Serpent ( that you now like to call the"jet stream") snaked along with the cold from Nanook much farther south than normal and bumped "Jack's" hurricane out to sea.  Then the Great Sky Serpent turned north only to get entangled with "Jack's" work product again. It was a mess, but a lot of cold air was let out of the high arctic, and a lot of  hot air left the tropics in a big gulp. On a human scale the results were awful, but on a global scale the heat ex-changer functioned.  In both cases the  mechanics of what happened were driven by "Forces of Nature". Being a Force of Nature is what I do. I do it whether humans perceive me as a personality or just the sum of my parts. 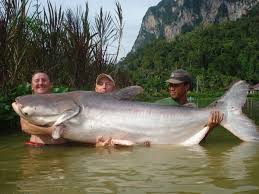 No catfish died or were mistreated in the production of this article- Namazu
Posted by American Admiralty Books at 8:26 PM