SEA PLANES AND THE FAR EAST 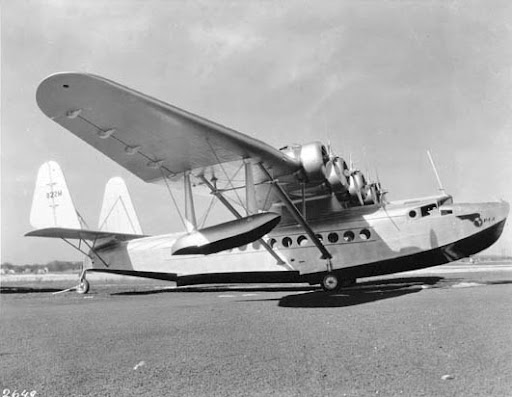 Ever since the end of World War II and the adoption by the U.S.Coast Guard of helicopters as their primary aviation search and rescue asset, the use of real "seaplanes" in the United States has all but ended. Of course down here in Louisiana we see so called "seaplanes" in use in the coastal oil fields but these are really pontoon equipped light planes designed for non retractable "wheels down" operation. They are fine for landing on a placid bayou or canal, but not on open water except under the most placid of conditions. The days of the old PAN AM "Clippers", long range, big capacity "Flying boats" with floating fuselages are long over. These days we like to use the more generic term  "amphibious aircraft" . That term is broad enough to include the anemic pontoon planes still in use in the United States all the way up to the old PAN AM Clippers. Make no mistake about it what Japan now builds and uses, what India wants to build, and what Malaysia is flying are not quite the old Pan Am Clippers but much closer to that than the pontoon planes. What is coming out of the Far East today are real "seaplanes" as in "flying boats". These are long range, respectable air speed , genuine flying boat, the kind where the length of the fuselage floats and the wings have small pontoons underneath and the engines and props are set atop the flight deck. These are smaller than than the old air liner sized Pan Am clippers but the larger ones rival some of the regional air carriers planes in passenger capacity and the naval / Coast Guard / logistic support configurations carry impressive cargo or mixed passenger and cargo loads. But that is where the comparison with the Old Pan Am Clippers stop. These are modern air craft built with the latest air frame, engine, and avionics technology and the latest in cabin creature comforts in the passenger configurations. Business and governments are finding increasing uses for these air craft in many parts of Asia. If the deal between Japan and India is inked, the production lines increase and we may see more price stability and continuing design evolution.

Why the revival of this technology in Asia ? Geography is the short answer. From Japan down to the North coast of Australia and across the Indian Ocean to India there are numerous off shore island groups where land for air ports is scarce and could be put to better use. Generally these islands are too far offshore for economic logistic support by helicopter. Not all have good harbors, not all of the products of modern life are suitable for shipboard transport. Some of these areas are old service points for the Pan Am flying boats of the 1930s. These areas were disrupted by war, under served by returning colonial powers, in some cases disrupted again in civil strife as the colonial powers withdrew. They have now been self ruled for generation or more and are emerging as vibrant economies and societies unwilling to see their countrymen in more isolated sections of their territories being deprived of adequate transport and communication. In many cases they also face a hungry Dragon seeking to devour all or parts of their island territories in an dangerous game at the heart of which is a legal argument called "effective administration". These nations must extend the reach and staying power of their own Coast Guard and naval services or China will extend this type of "presence" into their offshore territories and then claim that they "effectively administer" the territory when making territorial claims before the UN.  Effective settlement trumps effective administration and any other argument over sovereignty so these nations can not afford to discourage continued settlement where it has occurred. So in this broad region we see the return of the "seaplane" or "flying boat", modernized safer, more reliable than its 1930s predecessor these are a modern tool for a new era of  offshore development and offshore territorial contest..

Why is this good news for certain northern hemisphere Western nations including the United States?  The United States, Canada, Iceland, Greenland and the Scandinavian Nations are already locked in a territorial contest that the general population of at least the United States seems hardly aware of. Russia is taking over the Arctic Ocean and making outrageous territorial claims. The Bear has a big advantage in ice capable hulls and ice breakers as the contest starts out. The Bear also has real Arctic  logistic support air craft. In both the Asian island disputes and the High Arctic contest we are looking at a new kind of "low intensity " conflict where ships, boats,and  air craft of "coast guards" and "fisheries services" muscle their way into their neighbor's territory and then protect fishing fleets and off shore oil exploratory vessels while hired gun lawyers prepare to legally hijack the turf in UN forums claiming "effective administration".

Really there is nothing "low intensity" about these conflicts; they may feature low exchange and somewhat low probability of exchange of kinetic energy weapons, but they are very costly in terms of expenses for equipment and personnel, and legal fees. If a nation can't hold its own in the offshore shoving match the weaker nation can expect a legal mugging in a UN tribunal. There is nothing low intensity about the pressure being exerted.

The United States has areas like South Louisiana, Puget Sound, Maine, and the Inside Passage of Alaska that are quite watery but they have become well laced with surrounding road and rail systems and ferry services and have lost the need for the type of rugged reliable, and regular air service these planes that India wants to build represent. But these types of planes are one type of equipment that we will need if we wake up to the High Arctic challenge.  Thankfully, when we wake up, the production lines will be open and what we need will be on the "show room floor". Equally important organizations like the Malaysian Maritime Enforcement Agency (coast guard) and the Japanese Maritime Self Defense Force will have years of operating experience to share. As the navies and coast guards of the "Tiger Economies" continue to professionalize, and as their defense industries expand, new naval and coast guard professional peers are arising some of whom are expanding skills and developing equipment that we have long neglected. Fortunately the United States,  Australia, and Canada have maintained friendly relations with these states including navy to navy and coast guard to coast guard. Just as we can provide an air craft carrier task force to our friends in time of need , they in turn have technologies and recent operating expertise that we lack at the moment. To our squabbling and and ineffective government in Washington we say that trying times are coming whether or not you are ready. Keep our friends close.

To read all about the specifics of the pending India / Japan deal click here:  Seaplane Deal