YARN FORWARD...HOW CHINA CONTINUES TO PLAY NAFTA AND THE CBP TO ADVANTAGE 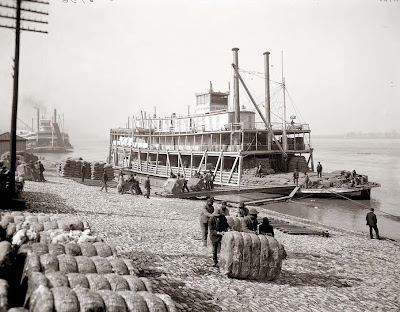 Cotton Cargo and transport on the Mississippi (PD-old-100)

Research by a team  led by the Great Namazu, article edited by Namazu

Editors note 12/8/2015: This may be worth a revisit as China prepares to launch one of the worlds reserve currencies and all of the negative effects that will have on the U.S. dollar.

Editor's note 1/21/2020: The Chinese all out assault on the US dollar as the world's premier reserve currency lost it's steam due to several developments. One was the rise of the US to self sufficiency in, and later exporter of oil and gas and the other was pretty much the election of Donald Trump as President of the US. China was buying gold at an incredible rate hoping to ween the oil producing world off of its' preference for payment is US dollars. The dragon was touting their currency as soon to be as "good as gold". Trump opened the spinet on the LNG plants that Obama kept from going into the export game despite our over abundance of LNG. Increased drilling brought the US first to self sufficiency in oil and then made us an exporter. Suddenly not only the oil producers pull away from the reserve currency game and returned to their dollar preference. but the US became one of the largest exporters of oil . Now buyers could actually buy oil and gas direct;y from the US . The global view of the US dollar as a fiat currency changed to something of a commodity based currency particularly oil. The Dragon is back in his den at the drawing board planning his next assault on our economy. Meanwhile after fixing the world and particularly the US textile industry to work to the Dragon's advantage, the Chinese are starting to move textile plants back to the US to take advantage of transportation cost reductions so as to improve their lead over other foreign suppliers of textile products to the US.

Message from the Great Namazu:  Ahoy Bipeds! I know you are all in the quaint habit of covering your nearly hairless hides with textile products like shirts and skirts. Personally I've never understood the practice but if you wear cloths this article should be of as much interest to you as it should be to Customs officials, auditors of customs regulatory enforcement efforts, legislators, members of the textile industry world wide, not to mention people like cotton farmers and the crews of barges, ships, and rail lines, and trucking industries that move the product. However if you don't work in any of the aforementioned industries and are a nudist you may want to skip down to the next post, unless you are just curious about how the clothed beings live.


You would think that as long as the United States has been growing, transporting, and selling cotton, and as old as the Garment District is in New York, or considering how long the textile mills of the Carolina's have been around that we would be pretty astute at regulating our textile trades. The problem is as old as America. Prior to the American Civil War northern textile manufacturers were adamant that southern cotton producers should be forced by federal law to sell to them or be forced to pay an export tariff. The cotton producing South of course preferred to sell to Great Britain at world prices which then were higher than what New England wanted to pay. It was largely this disagreement that led to the first mechanized war with its massive destruction of the South including the complete leveling of two cities Richmond and Atlanta and a scorched earth policy that frankly should have been considered a crime against humanity , except that it was committed by the victors.*  Of course there was the matter of slavery which the Union started citing as a war cause about two years into it when they needed to assume the moral high ground before reducing their neighbors to ashes.* Low labor costs are still a driving factor in the global textile industry battle for supremacy.* In that battle the U.S. was long ago knocked out of the ring by the Dragon, China. Roughly a century and half after leaving more than 50,000 war dead related to the issue of textile regulation the U.S. still doesn't know how to regulate textiles, or audit the effects of their regulations..
*
NAMAZU EDITORIAL NOTE: These passages may seem a bit a biased toward the Southern cause in the American civil war. The post was prepared in winter so that means the research staff are the regular crew down in New Orleans where they are still a bit peeved about what they call "the War of Northern Aggression" or in the company of Yankees, "the late unpleasantness".  I would have edited these passages out but found that while presented in a partisan argumentative style the assertions are basically factual and left like originally written give the reader some idea of  the still lingering ill feelings generated over America's last great failure at effectively regulating textiles in the national interest.

Photo USDA: Cotton ranks with salt, clay, spices, and oil as a raw commodity that has had a profound effect on shipping and history. It is a product that wars have been fought over.
Like salt, clay, spices, and oil almost everybody has a use for it in their daily lives, unless you run around naked or clothed in furs and animal hides, or those uncomfortable synthetics largely a product of petroleum. (The most comfortable "synthetics" are usually a blend of cotton fibers and petroleum spun fibers). Really, unless you are reading this naked the odds are that you are wearing something containing cotton fibers right now.


The modern problem is that present day Congressional leaders and White House denizens seems to think that they have some obligation to share prosperity with the less fortunate world, and the world is full of dragons ready to snatch from the arms of the deserving, or at least the targeted arms of U.S. selected trading partners. One case in point is the importation of finished textiles such as sheets, shirts, pillow cases, sweaters, curtains, bolts of cloth, and similar woven , sewn, or knitted items. Past administrations and congresses of both parties in their rush to ship manufacturing jobs overseas, decided to throw a bone to the Carolinas, and New York City, the big losers in the exportation of textile manufacturing jobs. The bone is known to those astute in customs regulations as the "YARN FORWARD RULE"; part of the Customs Regulations Rules of Origin

The Basics of the ROO (RULES OF ORIGIN)

"Determining the country of origin of a product is important for properly assessing tariffs, enforcing trade remedies (such as anti dumping and countervailing duties) or quantitative restrictions (tariff quotas), and statistical purposes. Other commercial trade policies are also linked with origin determinations, such as country of origin labeling and government procurement regulations. Rules of origin (ROO) can be very simple, noncontroversial tools of international trade as long as all of the parts of a product are manufactured and assembled primarily in one country. However, when a finished product’s component parts originate in many countries—as is often the case in today’s global trading environment—determining origin can be a very complex, sometimes subjective, and time-consuming process. (Emphasis by AAB).U.S. Customs and Border Protection (CBP) is the agency responsible for determining country of origin using various ROO schemes. Non-preferential rules of origin are used to determine the origin of goods imported from countries with which the United States has most-favored-nation (MFN) status. Preferential rules are used to determine the eligibility of imported goods from certain U.S. free trade agreement (FTA) partners and certain developing country beneficiaries to receive duty-free or reduced tariff benefits under bilateral or regional FTAs and trade preference programs. Preferential rules of origin are generally specific to each FTA, or preference, meaning that they vary from agreement to agreement and preference to preference. "  Source:Congressional Research Service Report : INTERNATIONAL TRADE RULES OF ORIGIN-Jones and Martin January 5, 2012

One of the most important features of a trade agreement is the rules of origin. With "leaky" rules of origin (ROO) any trade agreement becomes potentially global opening up the terms of the agreement to virtually any nation, not just those who originally inked the agreement. However, the complete exclusion from liberalized market access of any goods produced by non signatory nations turns a "free trade agreement" into a closed trading block. Trying to avoid both extremes requires not only superior legal draftsmanship in penning the ROO but also periodic audit and adjustment to assure the regulatory regime is performing as intended.

The "Yarn Forward Rule " was primarily intended to exclude certain textile producers without penalizing specific trading partners and to throw a bone to the sorry remnant of the once thriving U.S. textile industry. With "Yarn Forward" supposedly the remnant of the once large American labor force that historically made much of America's bed sheets, shirts, undergarments, towels etc. , and yes; that  "All American" globally popular product, "Blue Jeans";  could at least hold on to the job of making yarn. Various favored trading partners who used U.S. made yarn were offered a variety of incentives. Depending on the nature of their relationship these incentives ranged from low to no import tariffs to the actual right to affix a "made in the U.S." label to some goods assembled in certain nations out of U.S. yarns.  The drafters of the ROO really thought they had something. But the Dragon ate their lunch and the lunch of most of U.S. targeted beneficiaries.

.The Dragon, China, at the moment dominates the global textile market. However its not always obvious. Here is one example. Kenya has about a half dozen textile plants all exporting with diligence and fervor products at greatly reduced or no tariffs. Our intention was of course to benefit Kenya. But who really pockets the difference? Why the owners of the textile plants of course;  they are all in China. The same products coming to us from China would owe comparatively heavy duties compared to Kenya. We send yarn to certain nations favored by our trade agreements with the understanding that they may make the final assembly into say table cloths and instead they send them to a plant in China with whom they have a separate duty free agreement. The table cloths are sent back and the nation we intended to benefit gets to affix a "made in The USA" label. Did our generosity that cost Americans in the Garment District of New York and mills in the Carolinas their jobs, produce more jobs for the targets of Federal foreign generosity?

We only had the resources to check a few nations in the textile supply chain to America but found that in each corner of the world where we checked, the Chinese actually owned a controlling interest in the majority of textile plants in nations benefiting from our "Yarn Forward" rule. What should we do?

Posted by American Admiralty Books at 12:41 AM