MOST AMERICANS KNOW THAT BEN FRANKLIN WAS AN INVENTOR BUT QUITE A FEW BELIEVE HE HAD A MAJOR MARITIME INVENTION, Another in our Series Sparked by Unusual Key Word Searches


We noticed on our blog "dashboard"the other day that someone was vectored to our site on a key word search of "Ben Franklin's Invention of the Watertight Bulkhead". Of course with our encyclopedic ambitions we were happy that search engines had brought this visitor to us, but disappointed that we had nothing on the subject within our site. We had been unaware that Ben Franklin had invented a watertight bulkhead but  we were quite certain that he was not the inventor of the watertight bulkhead.  We are aware that certain Chinese vessels featured this design element centuries before Ben Franklin was born. Once we are confronted with a visitor with an unsuccessful key word search we try to get and post some relevant facts so that we are not stumped on the particular subject a second time. As it turns out there is a lot of confusion over Ben Franklin and water tight bulkheads in ship design. 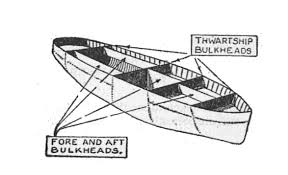 Apparently quite a few people believe that Franklin invented the water tight bulkhead.  In actuality he was simply a commentator on the idea and pointed the shipwrights of the day to a Chinese publication describing watertight bulkheads that was centuries old.  In 1784, Franklin recommended using the Chinese method, which had existed for centuries and was described in the  "Garden of Strange Things," written in the 5th century, by Liu Jingshu.  Hopefully the next
visitor who is vectored over to us on this issue will find this post.