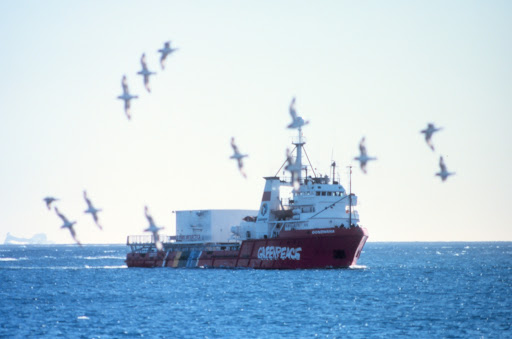 Once again we bring news of Green Peace disturbing the peace by forcefully
and unlawfully boarding an oil rig. Reuters has the story we provide a lead in and a link
below. These tactics never work and for the price of operating these ships then legally
defending the indefensible antics of the crews, Green Peace could launch a hell of an
oceanic environmental legal defense team. You don't want a drill ship at a particular
place, just board it and shut it down or damage it. Yeah right, the owners just call the
coast guard or maritime police authorities, they take away the Green Peace crew at
public expense then prosecute them at public expense while the drilling contractors
continue to drill away. Why hasn't it ever struck the Green Peacenicks that a well
reasoned law suite engages the drilling interests and has to be defended out of their
their pockets. These show boat tactics simply endanger people and the sea and
transfer costs of the minor annoyance to the public. You want to target oil
companies, sue oil companies when they file for their drilling permits in sensitive
areas. Its safer, less hazardous to human life and the environment, forces corporate oil
interests to pay legal fees, slows drilling progress, and preserves the public purse.
But it ain't gonna happen. Green Peace is about egos and grandstanding. Litigating is
work and not very glamorous. But it is effective.

"OSLO, May 29 (Reuters) - A Greenpeace ship arrived on Thursday at the Arctic location where Norway's Statoil is planning to drill the world's most northerly oil well, ahead of the company's rig which was making its way to the site.By late afternoon the rig was approaching the ship. "It is within sight, it is standing by," said Greenpeace's Truls Gulowsen.Earlier in the day, Norwegian police had removed seven Greenpeace protesters who had boarded the rig to stop it getting to the Barents Sea and Bear Island, an uninhabited wildlife sanctuary which is home to rare species, including polar bears" READ THE COMPLETE STORY AT REUTERS.
GREEN PEACE