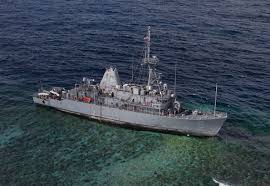 The Philippine Coast Guard said on Tuesday that the grounded USS Guardian is expected to be fully removed from the Tubbataha Reef by March 23. As described in previous reports it is being broken and removed in pieces. The ship was declared a constructive total loss by the U.S. Navy early last week.Lt. Cmdr. Armand Balilo, Philippine Coast Guard spokesman, told reporters: "In thelatest salvage proposal submitted to us, the US Navy salvage team is lookingat finishing the salvage works before the end of March. Of course, thistimeline will only hold if everything works out according to plan."

Salvage operations for the grounded US Navy minesweeper are expected to startafter the arrival of the 606-ton pipe lay crane vessel Jascon 25 atTubbataha Reef on Saturday.The  crane ship Smit Borneo, presently on scene does not appear to be large enough for the job alone. The salvage master  in charge of the operation decided to wait for the Jascon 25,  the larger crane ship starting salvage operations beyond removing valuables and smaller bolt on deck machinery.The  Jascon 25 left Singapore on February 9 and is expected toarrive at  Tubbataha   reef on February 16.Rough sea conditions are being blamed for the delay of the salvageoperations. Originally slated  to begin  February 10 th the plan had to be delayed for weather,  The present salvage plan calls for chopping up the  USS GUARDIAN on thereef and lifting it off piecemeal by a crane ship, to the Smit Borneo,"

There are seasons of sorts even in the tropics and the salvors are at the rump of the season, the season will change before the scheduled completion. Season changes often bring protracted storms. Lets hope for the best,  March 22nd may be an optimistic estimate.
Posted by American Admiralty Books at 4:23 PM