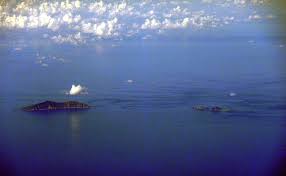 Below is a a seemingly lengthy quote from a translation of a Japanese Journalist. Actually, in comparison to the entire article the excerpt is rather short and appears near the end of the article. I chose this excerpt because for the first time it exposes our readers to the pre-WWI history of the Islands .  It paints the Chinese argument in a rather bad light. But the article is unique among writings in Japan because it admits to Japan's mid 20th century aggression in the area and acknowledges the distrust that the international community may have for Japan, which is causing Japan to have to defend the Islands with police and Coast Guard forces and largely hold back on real military forces while China masses similar non military forces to totally engulf the Islands to disprove effective Japanese effective administration while filing suite in the UN for control of the Islands. The failure of the World to recognize China as a thug state and her claims as bogus on these islands, forces Japan into the defensive. I urge you to read the entire article. While of Japanese origin it seems based on "real politic", and solid history and throws a lot of light on the island dispute. This particular island dispute is one of the most important reasons I explore in my "ADDRESS TO THE ENGLISH SPEAKING PEOPLES " advocating a general naval build up of the English Speaking peoples and a closer naval alliance bordering on a virtual "Naval Union".

".........China and Taiwan began claiming sovereignty of the Senkaku islands in the 1970′s after experts discovered oil reserves might be found under the sea near the islands.  China claimed that Japan invaded the Senkaku islands during the Sino-Japanese War (1894-1895) — however, GOJ began researching if the Senkaku islands were “terra nullius” in 1885, by ordering a steamboat from Okinawa to conduct site surveys.

Back then, the Qing Dynasty had supreme military power with powerful ships.  In 1886, four Qing Fleet ships appeared in the coast of Nagasaki and landed on Japan soil.  Sailors of the Qing Fleet assaulted and stole from the Japanese people, resulting to injuries and deaths.  This incident — known as the “Nagasaki Incident” — proves how powerful China was; so, how could Japan “invade” the Senkaku islands?  Japan must use historical documents to prove how China and Taiwan’s claims are unsubstantiated, while gaining the international support that Japan has territorial rights.  Japan must not forget that China is attempting to disprove Japan’s claims to territorial rights.Historically speaking, when a “status quo” nation is more powerful than a “change seeking” nation, the situation usually does not escalate to brute force.  However, if the level of power is reversed, the situation can quickly turn to forceful resolution.  The current military power between Japan and China is equal, but it is also apparent that China is rapidly expanding its power.  With China’s clear position on the Senkaku islands being their “core interest”, it is unlikely that an amicable resolution is attainable.

The Chinese Communist Party cannot risk to be viewed as weak-kneed by its 1.3 billion population.  However, China must also keep in mind that an armed conflict with Japan will lead to the involvement of the U.S. military, which will guarantee China’s defeat.  Therefore, China must be smart in its strategy — i.e., to maintain the conflict with Japan within the realm where it does not involve the U.S.

Japan must come to realization that it must demonstrate its willingness and intention to prevent forceful landing at all costs, or the U.S. will not execute collaborative defense in accordance to the treaty.  JCG and remote island police must strengthen their security postures, with the support of JSDF, to validate the line of (territorial) control, while GOJ convinces the international community that Japan has territorial rights to the Senkaku islands.

Furthermore, Japan must align its military power with the U.S. to fully defend its territorial waters.  Should Japan fail to take such actions, control over the Senkaku islands will definitely be lost.