INDIA MAY BARTER TEA FOR OIL WITH IRAN 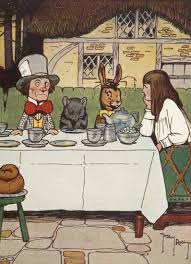 India wake up! You are a religiously diverse nation. Iran  has a simple vision for the world, convert to the particularly hateful brand of religion that their supreme religious and political leaders offer, or suffer death. If Iran succeeds in obtaining nuclear weapons they will use them without hesitation. They will only pause long enough to assign nuclear weapons to client terrorist organizations in the hope of plausible deniability. They need you now because you have a commodity they want and as a non aligned nation you seem willing to trade with them. The sanctions imposed on Iran, a true Rogue State and locus of international terrorism are painful for the ordinary people of Iran. But they are working in terms of slowing Iran's acquisition of nuclear weapons. Eventually they may work encouraging the people to turn over the regime for something that doesn't threaten the world. Israel, the European Union nations, and the United States may top Iran's target list. But eventually you will be on it if they succeed. Religious freedom is not tolerated by the leadership of Iran. Democracy is not tolerated.

Iran will use you if they can for as long as they can. But this time your best interests as a nation are with the rest of the world that is determined to not let Iran obtain nuclear arms. This is not the Cold War. Iran is run by ideological true believer mad men. If they obtain nuclear weapons they will use them as soon as possible. Yes, you are a Nuclear power. So are many of those who stand against Iran's obtaining of nuclear weapons. Why are we so afraid? Because we understand that "mutual assured destruction" won't work with mad men. They will use the nuclear weapons first. They will deliver them not by bomber or missile but by some terrorist in a van . While the nation they struck tries to figure out who is really responsible they will hit two more nations. While you are useful to them you will survive. When they feel able they will attack you. You are a democracy, religiously tolerant, and you have things they want. In their religious view since you are not part of their sect, you have no rights and they may do to you anything that they feel is necessary to bring about the global rule of their particular sect. So don't do it Tigers, this Peacock is poisonous.

If by some chance your nation escapes the first couple of nuclear barrages from Iran, you can bet that at least one of the attacked nuclear powers will turn Iran into a glow in the dark parking lot. Given your proximity to Iran, might the prevailing winds at least seasonally bring some of that radiation to you? There can be no fence sitting on this one, no gaming. Iran must not obtain nuclear weapons and every scam that helps them adjust to and avoid the pain of sanctions works against world peace and security. You are  a better nation than that India, don't deal with the real "Great Satan".

India may barter tea for crude oil from Iran

“We are advancing towards a situation where this association itself will directly import Indian teas and take care of domestic distribution. As India is importing oil, the possibility of a barter-type arrangement with tea is also being considered.

Posted by American Admiralty Books at 12:11 AM